« Looking to when there will be nobody to speak for me | Tie police hands, and you will see lots of citizens with AR-15s »
|

Despite residing in the most rural of states, many leftist Vermonters suddenly presume to be great experts on the inner-city suffering of black Americans, and have launched a fervent ideological mission — despite COVID and an imploding economy — to implement radical societal change to advance the lives of "people of color."  In doing so, Vermont's government has become chief arbiter, and it refuses to permit any voices of dissent — defacing a BLM sign, or calling BLM racist, is regarded as hate speech!

The capital city commissioned the painting of a Black Lives Matter mural in front of the State House but denied a request to paint "Liberty and Justice for All" for Independence Day.  Vermont governor Phil Scott advised the Agency of Transportation to leave BLM graffiti undisturbed but to remove any opposing messaging.  One school board recently announced that gay pride and BLM flags will be displayed when schools reopen, refusing to even consider a petition in opposition signed by more than 500 residents.  One school principal was fired for opining that white people should not be labeled racist simply for refusing to endorse BLM. 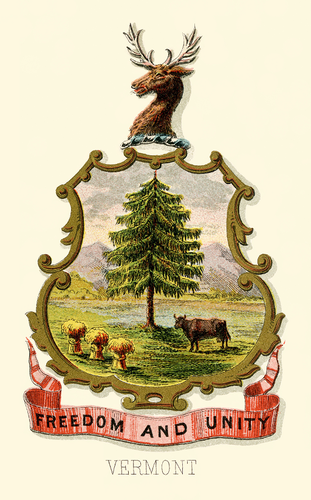 Schools, hospitals, and businesses are jumping on board with this government-endorsed campaign to rid Vermont of its supposed racism.  In fact, attempts to defend Vermont's history as pro-abolitionist, or to object that it is the best state in the nation for racial comity, are dismissed with condemnation as "denying systemic racism."  Yet Vermont has the narrowest income gap between blacks and whites and is the only state where blacks hold graduate degrees at higher rates than whites.

In the name of suppressing hate speech, Vermont is actively dismantling free speech — which is the strategy of critical race theory and the far left.  Stunningly, it is shamelessly using the levers of government authority and power to do so, as if the United States Constitution had never been written.  Anyone who questions BLM is immediately declared racist.

Following the Charlottesville violence, Phil Scott squared off with President Trump and declared that "we must not allow hate speech" — apparently unaware that the speech he was decrying has been specifically and repeatedly shielded from government restraint by the United States Supreme Court.  There have been two egregious examples of stifling protected speech at Vermont's prestigious Middlebury campus, yet the governor has never condemned those incidents — even when a professor was physically attacked and injured.  Apparently, physically assaulting people is protected here, by our governor, because free speech rights have been turned upside-down.

This imbalance is not restricted to BLM.  Climate protesters in Vermont have blocked traffic, stopped a parade (with cows left in the hot sun), shut down the governor's "State of the State" speech at the Vermont State House, and otherwise been permitted free reign to disrupt and intimidate — with almost zero condemnation, and certainly no criminal charges.  When government and the media no longer uphold the Constitution, the sociopolitical contract that has bound Americans together for 250 years begins to unravel, and the Rule of Law crumbles into anarchy and barbarism.

That decline was evidenced July 25 — again at the Vermont State House — when concerned citizens organized a rally to support law enforcement and first responders but were overwhelmed by larger numbers of screaming, physically threatening protesters, and the event was shut down — with zero police protection provided for organizers, who held a legal permit.  Vermont's liberal media tarnished itself by disgracefully misreporting the event, but social media show what actually transpired.

The criminal actions of corrupt police, as in the George Floyd incident, threaten the Rule of Law.  But it is wrong to blame good police for the actions of the bad, and since law enforcement are restricted from open political activity, it is incumbent upon the citizenry to defend them (as with our military).  Yet the Vermont police — state, local, or capitol — did nothing July 25 to shield those who took risks to stand up for them.

Perhaps if the police will not stand up to defend those peaceful citizens who defend the police, the police should be defunded.  But Vermont's police should not be blamed for this repeated failure to enforce basic constitutional protections, which include not only freedom of speech but freedom of travel, and the right to lawful assembly.  Instead, there are political forces that seemingly favor unlawful violent assemblies.  Why has Vermont's governor not stood up against these clear violations of law?  If the government does not protect these liberties — on public ground, where it has that duty — it has lost the authority to govern.

Vermont is just one of many American jurisdictions reflecting symptoms of a collapsing state, using allegations of hate speech to eviscerate free speech.  If only the violent protesters, and those entrusted to safeguard the Constitution, had the foresight to see where this leads — to their own demise.