I came across a State Department memo from the U.S. embassy in Madrid, dated September 19, 1974 (1974 Madrid 05880), declassified June 30, 2005. This document reveals that the U.S. was fully aware of the advent of "Eurabia," precisely as self-characterized in an official European socio-political journal bearing the title Eurabia.  It seems serendipitous in the midst of Geert Wilders' visit to the U.S. warning of the consequences of Europe's ongoing Islamization.

Eurabia was the title of a journal published in the mid-1970s  by the European Committee for the Coordination of Friendship Associations with the Arab World.  Eurabia"s editor was Lucien Bitterlin, president of the Association of Franco-Arab Solidarity; the journal was published jointly by Euro-Arab associations in London, Paris, and Geneva.  Eurabia served as a Euro-Arab Dialogue mouthpiece.

broad spectrum of European Community political groups.  Biannual Euro-Arab Parliamentary meetings convened alternately in Europe and the Arab nations.  Roughly 100 European and Arab members of their respective parliaments attended, along with observers from the European Community/European Union Commission, the Arab League, and other international organizations.  During an initial meeting in Damascus, September 14-17, 1974, the Arab delegates established their political preconditions for economic agreements with Western Europe, specifically demand 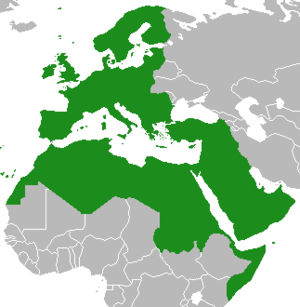 2. Arab sovereignty over the Old City of Jerusalem

4. European Community pressure on the United States to detach it from Israel and bring its policies closer to those of the Arab states

The September 19, 1974 State Department memo (1974 Madrid 05880) refers to a parallel meeting that took place in Cordoba September 12-16, 1974, as it notes, "one-time capital of [the] caliphate of Cordoba,  and one of [the] most historic centers of [the] Moorish legacy in Spain." Emphasizing the unique nature of this Cordoban conference, the memo provides these summary details regarding the attendees:

THIS CONFERENCE, REPORTEDLY FIRST EVER HELD OF ITS KIND, WAS ATTENDED BY NUMEROUS MEMBERS OF THE SPANISH CLERGY AND PRESIDED OVER BY BISHOP CIRARDA OF CORDOBA, AND WAS ALSO ATTENDED BY CERTAIN FOREIGN CATHOLIC CLERGY RESIDENT IN ARAB COUNTRIES, NOTABLY CARDINAL DUVAL OF ALGIERS AND THE BISHOP OF ORAN. GOS WAS REPRESENTED BY DIRECTORS GENERAL FROM MFA [Ministry of Foreign Affairs?] AND MINISTRY OF INFORMATION AND TOURISM, AND PROVINCE AND CITY OF CORDOBA WERE REPRESENTED BY SOME OF THEIR PRINCIPAL LOCAL OFFICIALS. ARAB COUNTRIES REPRESENTED AT CONFERENCE INCLUDED EGYPT, ALGERIA, LEBANNON [sic], IRAQ, SAUDI ARABIA, AND JORDAN. THERE REPORTEDLY ALSO WAS A PALESTINIAN DELEGATION PRESENT. MOST HIGH RANKING DELEGATE TO ATTEND THE CONFERENCE WAS DR. ABDEL AZIZ KAMEL, WHO IS BOTH VICE PRES AND MINISTER OF RELIGIOUS AFFAIRS IN EGYPT. THE IMPORTANT EGYPTIAN DELEGATION ALSO INCLUDED AN EGYPTIAN CHRISTIAN PARLIAMENTARIAN, ALBERT BARSOUM, WHO ALSO REPORTEDLY HAS MINISTERIAL RANK IN EGYPTIAN GOVT. MANY ARAB DELEGATIONS WERE HEADED BY THEIR COUNTRIES' AMBASSADORS IN MADRID.

And what is described as the "emotional and symbolic highlight of the conference" occurred on September 13, 1974: 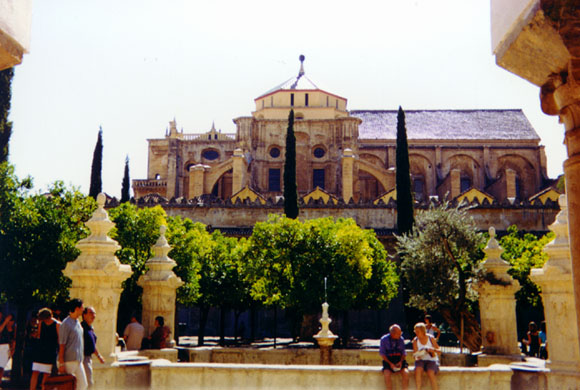 Unfortunately, the State Department analyst omits the fact that the "mosque turned cathedral" had simply been restored to a cathedral as a result of the 13th century Castillian reconquest. Here is Dozy's historical account of the prior mid-8th century "conversion" of this Cordoban cathedral to a mosque, resulting from the jihad conquest and brutal subjugation of the Iberian peninsula:

All the churches in that city [Cordoba] had been destroyed except the cathedral, dedicated to Saint Vincent, but the possession of this fane [church or temple] had been guaranteed by treaty. For several years the treaty was observed; but wh 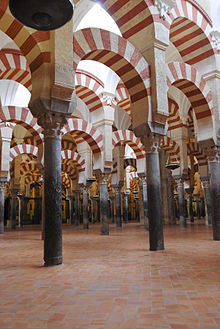 en the population of Cordova was increased by the arrival of Syrian Arabs [i.e., Muslims], the mosques did not provide sufficient accommodation for the newcomers, and the Syrians considered it would be well for them to adopt the plan which had been carried out at Damascus, Emesa [Homs], and other towns in their own country, of appropriating half of the cathedral and using it as a mosque. The [Muslim] Government having approved of the scheme, the Christians were compelled to hand over half of the edifice. This was clearly an act of spoliation, as well as an infraction of the treaty. Some years later, Abd-er Rahman I requested the Christians to sell him the other half. This they firmly refused to do, pointing out that if they did so they would not possess a single place of worship. Abd-er Rahman, however, insisted, and a bargain was struck by which the Christians ceded their cathedral.

However, to the analyst's credit,s/he is fully cognizant of the politicization of the so-called "Palestinian question," noting "a marked bias for the Arab viewpoint," in the Conference's conclusion, which states the group,

The State Department memo concludes that indeed this biased viewpoint -- fully concordant with the Islam's jihad supremacism -- was the most salient feature of the Conference:

IT [the Conference] WAS USED TO PROMOTE ARAB POLITICAL LINE WITH RESPECT TO PALESTINE, INCLUDING RECOGNITION OF PLO AS SOLE REPRESENTATIVE OF PALESTINIANS AND REJECTION OF EITHER INTERNATIONALIZATION OF JERUSALEM OR ITS ABSORPTION BY ISRAEL.GOS [Government of Spain], IN KEEPING WITH ITS MARKED PRO-ARAB POSTURE ON MIDDLE EAST AND PALESTINE, PROBABLY BELIEVES IT WILL BE ABLE TO GET FURTHER MILEAGE AT SLIGHT EXPENSE FOR ITS PROARAB POLICY BY HELPING TO SPONSOR THIS CONFERENCE IN SPAIN AND BY HAVING ALLOWED A STRONGLY ANTI-ISRAELI TONE IN THE CONFERENCE'S CONCLUSIONS. THOSE CONSLUTIONS, HOWEVER, DO NOT ACCORD FULLY WITH SPAIN'S OFFICIAL POLITION (REFLECTING THAT OF THE VATICAN) IN FAVOR OF SOME FORM OF INTERNATIONAL REGIME FOR THE HOLY PLACES OF JERUSALEM. IT ALSO UNCLEAR WHY CATHOLIC CLERGY ATTENDING ACQUIESCED IN CONFERENCE'S PRO-ARAB POLITICAL CONCLUSIONS.

Thus, nearly four decades ago, our own State Department was fully aware of the Eurabian project Bat Ye'or has subsequently elucidated in painstaking detail. Such independently confirmatory U.S. evidence underscores the intellectual and moral obtuseness of those who spray charges of "conspiracism" at Bat Ye'or, and worse still, viciously attack Geert Wilders, the most courageous European political leader resisting the abhorrent, dystopian endgame of Eurabia's fanatical promulgators.