Warning: mysqli_free_result() expects parameter 1 to be mysqli_result, bool given in /var/www/html/americanthinker/admin/common/functions/func.general.php on line 126
 Another $33 Mil Down The Federal Rat Hole - American Thinker
« The Obamacare Tax Fix | Now you stay classy BFD Democrats »
|

Another $33 Mil Down The Federal Rat Hole

Here's the front page from the Friday Morning, June 29, 2012 issue of the Albuquerque Journal. 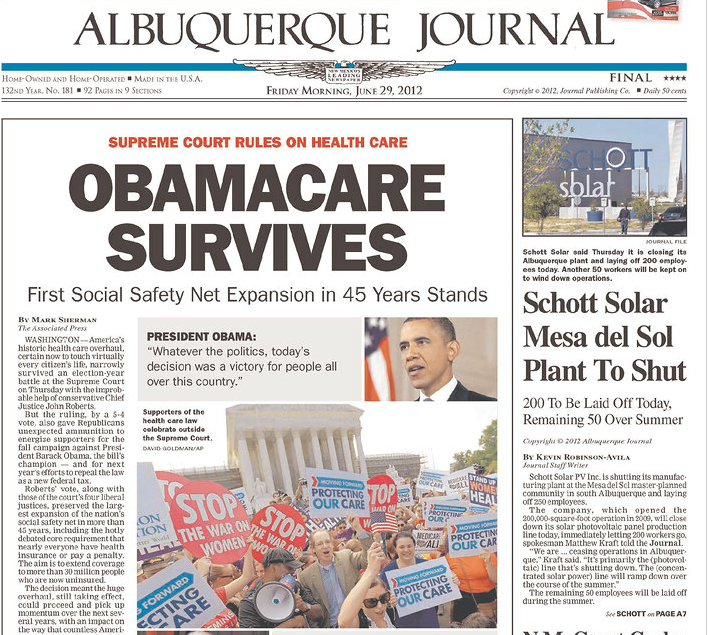 The Obamacare Survives headline shares the space above the fold with the announcement of the closure of Schott Solar PV Inc.'s solar photovoltaic panel production plant in south Albuquerque, New Mexico. The company will lay off 250 employees by the end of the summer.

According to the article,

"The world market for solar panel makers has been particularly volatile since last year...A sharp drop in silicon prices, coupled with low production costs in Asia, has led to a surge in imports of inexpensive solar panels from China. That, combined with depressed demand in European markets, has pressured U.S.-based solar panel makers.

Nationwide, this story was smothered by the SCOTUS ruling on Obamacare. But so what? It's only just another $33,000,000.00 flushed down the federal rat hole as a consequence of the Obama administration's promotion of what is, to date, a losing proposition.