Why is MLK Memorial Made in China?

Sometimes you read about a fact so outside your Weltanschauung  (world view), that you just shake your head at the silliness of the fellow inmates with whom we happen to share the same planet.  On August 28, 2011 the Martin Luther King Memorial will be dedicated in Washington D.C.  But today, I was surprised to find out that a noted Chinese communist artist, Master Lei Yixin, sculpted the 30-foot tall Memorial.  And even more unbelievably, the 159 pieces of red granite used in the Memorial were quarried and sculpted in China and then shipped to Washington D. C. for the final detailing. 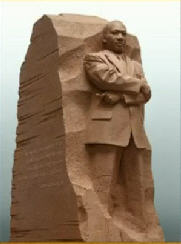 He first found work in a publishing company as a draughtsman but was spotted by a local government official, who asked and encouraged him to build monuments.

Lei won top prizes in national competitions three consecutive years, and was recognised as a master sculptor, which came with a lifetime stipend from the Chinese government. He has sculpted some 150 public monuments, including statues of Mao Zedong. Some of his works are in China's National Art Gallery collection Yixin came to the attention of the American public when he was named artist-of-record and commissioned to sculpt the centerpiece for the proposed monument to Dr. Martin Luther King, Jr.  According to Agence France-Presse, it was only by chance that memorial organizers found Lei when they visited an international granite-carving festival in the American state of Minnesota. Yixin was "discovered" under a tree, taking a nap after he was pointed out to the King Memorial Project Foundation committee with the words, "you should talk to that guy over there," pointing to Lei.

It is incredibly damning to the dream of Dr. King's' America, that this Memorial was crafted outside the United States. What message does this send to young black artists that the most significant American sculpture in the past 75 years, was quarried in China, and carved by a noted Chinese communist artist?  By allowing this flawed sculpture, that looks very much like Dr. King was frozen in carbonite before being delivered to Jabba the Hutt, to stand next to Jefferson and Lincoln, we have publicly humiliated ourselves; admitting to the world our national incompetence and vapid artistry