Warning: mysqli_free_result() expects parameter 1 to be mysqli_result, bool given in /var/www/html/americanthinker/admin/common/functions/func.general.php on line 126
 Will Fisker Motors Be Another Solyndra? - American Thinker
|

Will Fisker Motors Be Another Solyndra?

There's been considerable coverage of the Department of Energy's $534-million loan guarantee to bankrupt Solyndra.  But lurking unnoticed is a similar $529-million DOE grant to Fisker Automotive to build the high-end hybrid Karma and eventually mid-priced sedans.  With Hyundai, Toyota, Porsche, and GM building hybrids, why is the government funding an automotive startup?

Fisker's people believe that they can build a car with more consumer appeal.  Are they right?  The market will let them know, just like it has for Chevy's Volt.

There are two considerations involved.  First is the Karma itself, and second is the government loan in light of the Solyndra revelations.

Details are emerging as Fisker starts its Karma marketing roll-out.  In the October 2011 Vanity Fair (VF) print edition, on page 206 and 210 are four-color, full-bleed spreads, plus four more one-page ads ending at 221.  That's not surprising, since well-heeled progressive VF readers are Fisker's target buyers.  The meager ad copy, which doesn't exude much driving passion, announces that the Karma represents "Responsible Luxury."  It is "the first true electric luxury vehicle with extended range."  And its performance has "low impact on the environment." 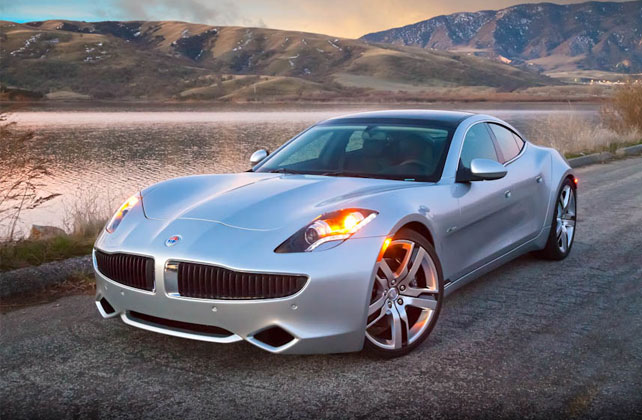 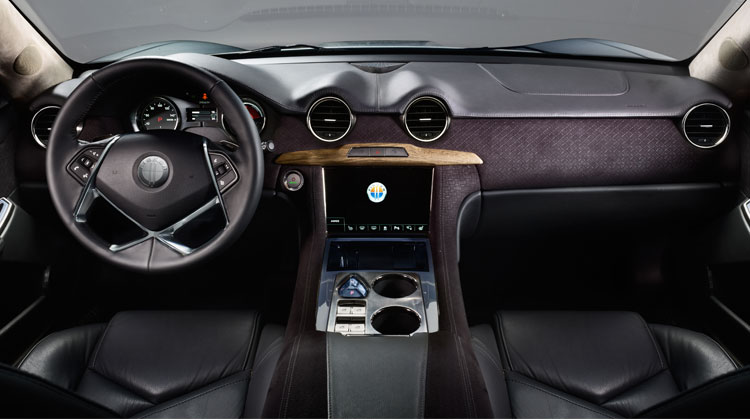 The ads explain that the car's EVer hybrid system delivers a "300 mile/483 km extended range" and "100 MPG/160km."  This is by virtue of a turbocharged GM ECOTEC four-cylinder engine driving an electrical generator which creates the power for extended range.

Fisker also claims a "50 Miles All Electric" range, adding that "Most people travel less than 35 miles/56 km per day."  The question unanswered is under what driving conditions was battery range determined.  Do they mean covering 50 miles in one hour, or two?  While battery-only operation sounds very green, how ecological is it when the recharging current is generated by an icky coal-fired plant?

As for being an American job-generator, the Karma is currently being built in Finland, and according to Car and Driver, the electric motors utilized are a product of China.

Currently, there's no full instrumented road tests.  Popular Mechanics (PM) completed their basic test drive.  The 196.7-inch-long, strikingly styled aluminum-body sedan weighs "about 5000" pounds, which is porky for a contemporary car.  Why is weight listed as "about"?  What's so hard about weighing a car?  Zero-to-60 is 5.9 seconds, which, using the engine-driven generator sending power to the motors, would qualify as just OK for that price.

Since PM describes the Karma as a "performance vehicle," a full road test providing 0-60, 0-100, and quarter-mile times; braking; slalom; and skid pad numbers is needed to understand this car's performance character.  Plus, flogging a Karma out on Mazda Raceway for a few laps would test for better or worse its hybrid performance capabilities.  For its price, they should be pretty high

Naturally, it's no surprise that wealthy customers are buying.  An Architectural Digest story mentions that Leonardo DiCaprio and Al Gore are Karma purchasers.  It's noble that millionaire celebrities, who wouldn't hesitate a nanosecond to fly their private jets for a weekend jaunt, are buying a car that's environmentally "low impact."

Will the Fisker Karma be profitable?  I presume that the list price means that each sale is profitable and not subsidized by loan funds.  Ironically, the Karma will qualify for a $7,500 hybrid vehicle tax credit, which means a despised tax break for millionaires and billionaires.

The second consideration is Fisker loan conditions.  Part of the proceeds involve buying a former GM assembly plant in Wilmington, Delaware to build their smaller, less expensive $40K Nina family sedan.  Will this car be noticeably superior to a Chevy Volt?  That's to be determined.

As for loan specifics, we don't know yet.  In the meantime, here are the questions I would pose:

-If there is a default, will the rich "1 percent" private investors, who have ponied up $470 million, get shuffled like Solyndra's so they get repaid before taxpayers do?

-In the loan application, did Fisker management include Nina sales estimates?

-Did any Fisker investors or management personnel bundle donations for Obama's political activities?

-Did Fisker management have White House access?  Delaware, by coincidence, is the vice president's home state.

Summed up, a car factory, union workers, and lots of suppliers make for a good way to burn through $529 million so that in the end, no one knows where the money went.  It's potentially like Solyndra, but with wheels.