« Is It Okay to Hate Your Husband Even If He's the President? | Why are we wasting our time discussing what they say at MSNBC? »
|

He may have won the Academy Award for Best Actor as Truman Capote, but in life's drama, Philip Seymour Hoffman flubbed his role as father and mate.

The death of the extravagantly gifted actor from an apparent heroin overdose boggles my mind. A man who was able to slip into the skin of his characters and inhabit their souls, making their essence shine brightly, was evidently unable to inhabit his own skin with any comfort or ease. Something in his life drove him to seek oblivion in drugs and alcohol starting when he graduated from NYU's drama school, as he publicly admitted. 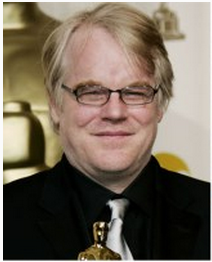 Hoffman's performance as Truman Capote that won him a Best Actor Oscar was one of the most memorable screen roles I have ever seen. It burned with intensity and verisimilitude, refusing to recede from my memory the way most movie portrayals do. And his comic turn as a rich man's toady in The Big Lebowski was skin-crawlingly memorable.

A man who could put aside his own personality and inject himself into the souls of such figures apparently pays a price. It is almost as if he abandons his psychological and spiritual moorings for his work, and then cannot regain them,

Hoffman fathered three children with a woman he never married, for some reason. They are now left without a father. Although I cannot know what the reality of this situation was, I can observe that he did not plunge himself into the anchor role of husband and father which might have served to keep him from obliterating his life with the consciousness that there was something far more valuable and important that the transitory sensations to be had from the tip of a needle. For all the illusory authenticity he brought to his portrayal of other characters, there was no authenticity to his occupation of the role of father, protector, and husband in real life. Those responsibilities preclude the seeking of oblivion if they are taken with the seriousness they demand.

I am very sad for him, his family, and especially for his children. Genuine tragedy requires a fatal flaw, and that seems to be present here. Hoffman paid with his life, and now those he left behind will pay for the rest of theirs.