When apocalyptic cults turn murderous, they become a danger to the public. The warmist cult, frustrated by the failure of nature to back-up their prophecies of doom, apparently is turning to homicidal fantasies, and venting them in the pages of the New York Times. A truly shocking cartoon was published in the pages of that formerly august newspaper, brought to our attention by wattsupwiththat.com and climatedepot.com.  In it, the frustrations of warmists over the unusually cold winter (which US Government climatologists completely failed to predict) are channeled into the suggestion that they use "the 2014 icicle surplus" as "Self destructing sabers for climate change change deniers": 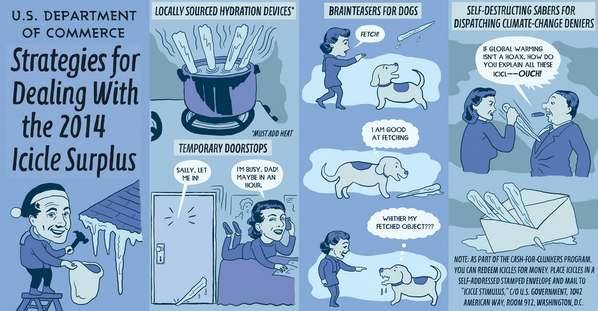 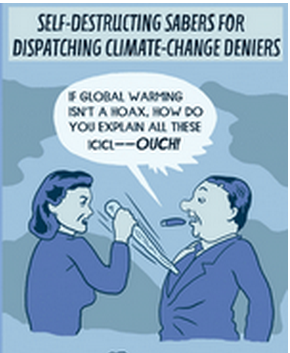 In response to a quesry from Anthony Watts of wattsupwiththat.com, Timesman Andrew Revkin commented:

I find the final panel in this cartoon on uses for surplus icicles to be the antithesis of humor. But some artists, like some bloggers, seem to thrive on edge pushing. Andres Serrano ("Immersion: Piss Cross") comes to mind. There are many others. We are quite a species.

Updated, 2:47 p.m. | It's worth saying more. This cartoon is right up there with the "pretty edgy" 2010 climate-campaign video showing a teacher blowing up students who didn't sign on to cut their carbon footprints.

Both are great attention getters, and were utterly stupid if the goal was do accomplish anything other than inflaming and dividing people on an important issue. And that would be a reprehensible goal.

Watts points out correctly that if a skeptic has posted something suggestion that Al Gore or James Hansen or Michael Mann be assassinated, the warmists would be infuriated. Yet the Times suggests killing all skeptics.

Irresponsible is the kindest adjective I can come up with for this. It is more evidence that this is a dangerous, anti-scientific, anti-democratic, and inhuman cult.