Warning: mysqli_free_result() expects parameter 1 to be mysqli_result, bool given in /var/www/html/americanthinker/admin/common/functions/func.general.php on line 126
 Nemesis of the pretentious feminist left strikes again - American Thinker
« Did Cuomo Aide Commit a Gun Crime -- and Get Away with It? | The world wants Cuba to change but the Castro regime doesn't »
|

The funniest, most satisfying read of the day has to be Zombie's delightful takedown of an attempt by feminists to hijack Valentine's Day and turn it into a celebration of victimology. On February 14, Vagina Monologues author Eve Ensler had earlier decreed something called V-Day, a "rape-themed anti-holiday," but once the novelty wore off, came up with the new, improved 1 Billion Rising day. As Zombie put it in her article .00001 Billion Rising: Another Failed Mass Movement:

The thesis behind 1 Billion Rising is that if the world's one billion rape victims all rose up en masse and danced every February 14, then rape would cease to exist because unicorns and rainbows.

The lengthy photo essay is a sardonic and insightful report on the pretensions of the left in San Francisco, reporting what was said and showing what happened, with just the right degree of reflection from the standpoint of a sane person. 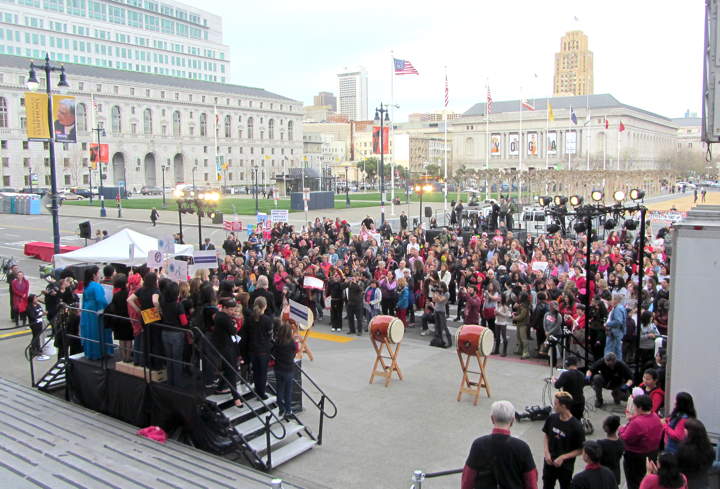 We gathered in front of San Francisco's City Hall at 4 p.m. for the ecstatic festivities. Would we reach one billion participants and stop rape forever?

I had previously estimated the attendance at last year's event as somewhere around two thousand. But the 2014 1 Billion Rising, as shown by this overall shot of the pitiful crowd I snapped from behind the stage, was much smaller - a few hundred at most. This newspaper report says there were only 100 participants, while a more generous media estimate says "nearly 400″ at the high end, most of whom showed up late in the event to hear Black Eyed Peas rapper apl.de.ap spin records as the headlining attraction.

The event's own official Web page reveals that only 71 people RSVPed, which seems about right, considering that well over half the people on hand were the organizers, performers, staff, volunteers, speakers and security.

Even an impromptu pillow fight flash mob, which happened at the same time as 1 Billion Rising just a short distance away in SF, drew a much larger crowd, driving home the point that Ensler's depressing attempt to transform Valentine's Day into a rant about rape hasn't caught on, even in the most sympathetic political environment. 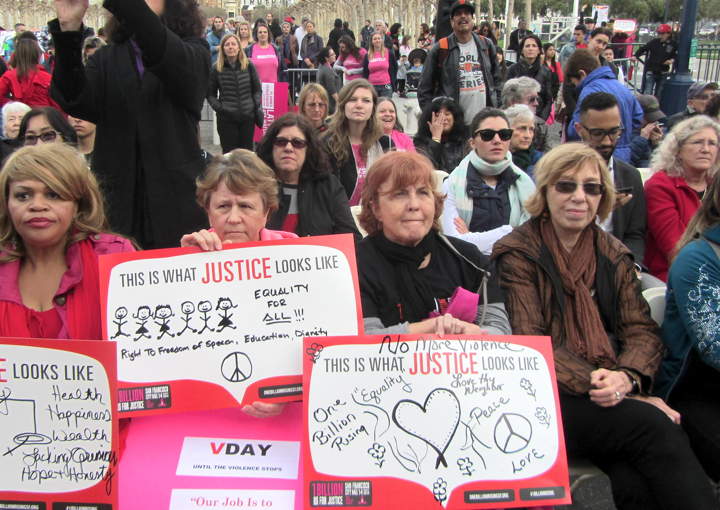 Missing...is any explanation of how "standing here as a woman with my strength and power" and "rising and dancing to end violence against women" will miraculously translate into a lower crime rate. What we have here is a classic example of "magical thinking," which confuses symbolic gestures with effective action. One is reminded of The Ghost Dance of the 1890s, in which Native Americans tried to stop the advance of western civilization by engaging in a series of dance rituals. Needless to say, the Ghost Dance was ultimately futile, as will be the dances of 1 Billion Rising.

Despite this, the joke's on me, because Enlser has already raised $100 million to promote her dance project. Perhaps the name refers not to the number of participants, but rather Ensler's fundraising goal: $1 Billion Rising out of your pockets into our bank account.

This is a great bit of fun to cheer you up after a 3 day holiday weekend ends.