Thanks to the University of Michigan's Population Studies Center, we have a fairly accurate sense of what the Muslin world thinks is appropriate dress for a woman, and it ain't pretty. On purpose. Daniel Pipes describes the results at NRO:

A survey conducted in seven Muslim-majority countries (Tunisia, Egypt, Lebanon, Turkey, Saudi Arabia, Iraq, and Pakistan) finds that a median of 10 percent of the respondents prefer women to wear either a niqab or burqa when in public. The specific country figures range enormously, from 74 percent approval of these two garments in Saudi Arabia and 35 percent in Pakistan to 3 percent in Lebanon and Tunisia and just 2 percent in Turkey. 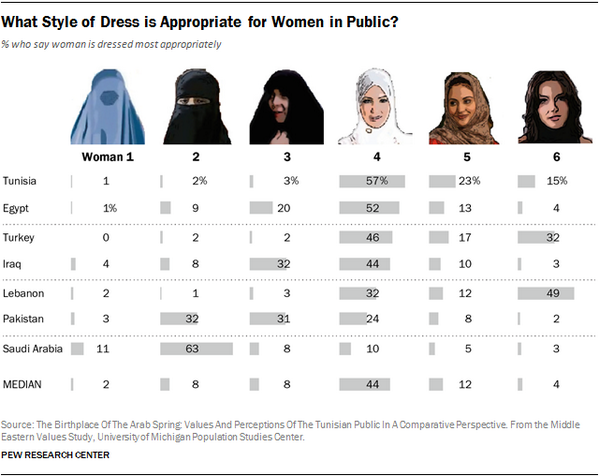 Lebanon is the only country where close to half the population believes it is accepatable to gaze upon a woman's hair. And Lebanon is torn by violence between its Christian near-half and its Muslim slight majority. One must suspect that those who find a woman's hair acceptable in Lebanon are mostly Christians.

Frankly, the notion that a woman's head and body should be covered up is becoming increasingly offensive to me. Just as the Saudis find the idea of a woman wearing a skirt and an uncovered head is offensive, I find the reverse quite repellant. The difference, of course, is that the Saudis expect foreign visitors to their land to respect their mores, while in America we allow people to viulate our cultural heritage with impunity.