Warning: mysqli_free_result() expects parameter 1 to be mysqli_result, bool given in /var/www/html/americanthinker/admin/common/functions/func.general.php on line 126
 The Sad Life of Julia Now - American Thinker
« An Obamacare horror story that hits close to home | Theater of the absurd: Deaf translator at Mandela funeral a fraud »
|

The Sad Life of Julia Now

Do you remember Julia, the Obama 2012 presidential campaign's concept of young women as passive and dependent,  incapable of succeeding on their own, until their knight in shining government armor comes along to rescue them with government programs from conception until death?  The Life of Julia comic pictorial exemplified this ideal world.

That was then, this is now.  A deep recession stalks the country; Obamacare haunts all, including Julia.  The conservative Independent Women's Voice, the organization responsible for mycancellation.com, the website telling the real story of those whose health insurance has been cancelled, brings us up to date on Julia's real life now with the true, harrowing tale of The Life of Julia's Policy.

It is not a pretty story.  Unlike the dream world Obama presented in his campaign, Julia's life in the real Obama administration is harsh.  She turned 26 and is kicked off of mommy's and daddy's health insurance policy.  Of course, mommy and daddy probably have their own insurance problems also.

Despite what Obama said, plucky Julia, not the government, built her own little business, a website design company and even bought a health insurance policy that she could afford and worked for her.  Whoops!   "But Julia couldn't keep it because it didn't meet ObamaCare standards." 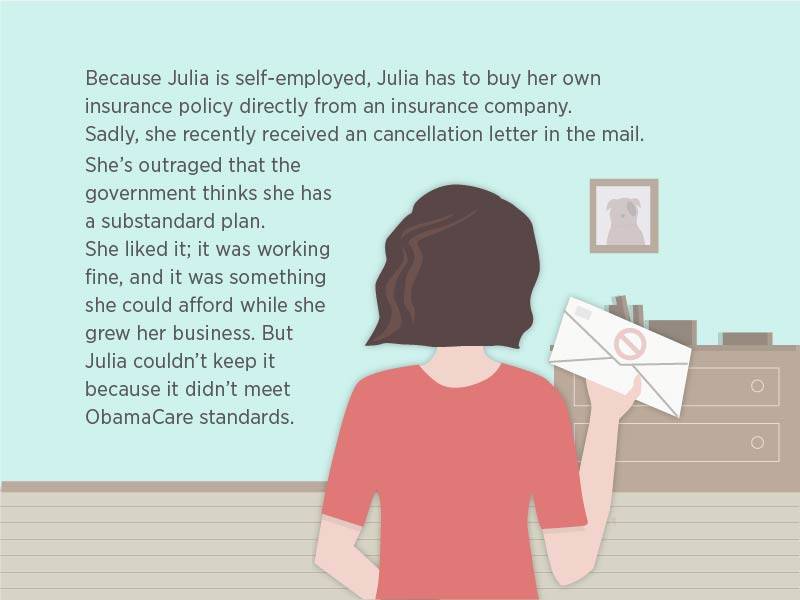 She then has a long, frustrating session with the healthcare.gov website, which even Julia, an experienced website designer,  couldn't use.  So she calls a navigator "who encourages her to lie about her income so she can qualify for a subsidy."  Horrified, honest Julia refuses only to discover "her new premiums will be double that of her cancelled plan.  Even worse, she also finds her deductible has skyrocketed and her network has changed."  Now she can't even use her trusted, familiar gynecologist; finding a new one, or any doctor,  is difficult because so many are not accepting new patients with insurance from the ObamaCare exchanges.  Finally, finally she reaches a doctor who agrees to see her...in four months.

But then a new problem comes along for web savvy Julia.  She "reads that her state's exchange has exposed  the private information of enrollees in a breach of data security.   Now she has to worry about her identity being stolen."

Julia is really, really sorry she voted for Barack Obama but it is too late!