After pushing Thanksgiving dinner indoctrination sessions that obviously proved less than copious, Obama's Organizing for Action has now released a new video in an attempt to get parents talking health care with their kids (those essential young and healthy) during Christmas.  And as if the video wasn't embarrassing enough, President Obama Tweeted an ad featuring a young man wearing onesie pajamas (talk about giving comfort to our enemies), drinking cocoa, and talking about health insurance.  So, "are you in?" 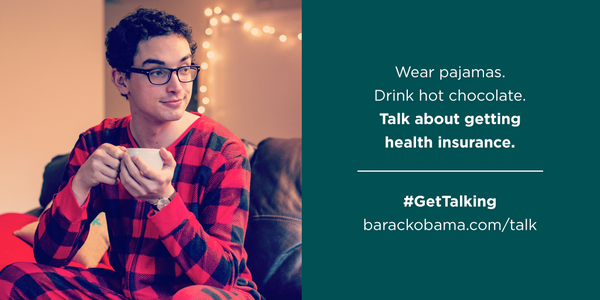 When this latest effort doesn't work, maybe the Obama administration will attempt to garner the attention of these 26-plus-year-old "children" by creating some sort of an Elf Yourself parody, perhaps resembling England's NHS Olympic opening display.  (Elf Yourself is the crafty website where you can upload your image info to the servers and -- presto -- you and your family instantly become part of a cartoonish musical skit.)  Though, in the case of ObamaCare, the name might best be changed to "Eff Yourself."

The real reason for low enrollment in the so-called Affordable Care Act is that Americans (including the young) have finally found out "what is in it."  Because of this, ObamaCare has already gotten the attention of the younger generations, who are rapidly discovering they've been had by Obama.  President Obama might as well be trying to sell them Gordon Gekko's enormous brick of a cell phone as the latest and greatest mobile device.

The Obama administration can use whatever propaganda it chooses, but all one need do is log on to Healthcare.gov, follow the instructions, and upload personal info to the "secure" servers to understand why there is little interest among those who can just pay the fine instead.  Be it higher premiums, higher deductibles, hacked data, or unexpected bank account withdrawals, these "kids" now understand that you will in effect "Eff Yourself" by using this website.  And if you're paying less due to a subsidy, well, then you're really just doing the same to the taxpayers.

As for the Republican Party, I'm sure Tea Party members, taxpayers, and wounded veterans will be having many a conversation over Christmas dinner about some of the things that have been said and done by members of Congress as of late.  I think certain congressional Republicans would've gotten a much warmer reception had they just told America to go "Elf Yourself" instead of what they in essence said instead.

Unfortunately, there's nothing at all funny about what is currently going on in the United States.