« The best, the worst, the weirdest of 2013 | What does Mayor-elect DeBasio have against horses? »
|

It used to be unacceptable for national news shows to broadcast race hatred as commentary. No longer. So extreme is the loathing of white Republicans that black commentators on two cable news channels have uttered patently ridiculous and shameful comments on a Romney family photo that shows the former presidential candidate with his black adoptive grandson on his knee.

First, on MSNBC, via Tommy Christopher of Mediaite:

On Sunday's Melissa Harris-Perry show, the eponymous host led a panel of entertainers in a rundown of the "photos of the year," which somehow included a Romney family picture that "a lot of people had emotions about," according to MHP. The setup seemed to leave room for unlimited comic potential, but the panel immediately honed in on the race of Kieran Romney, adopted grandson of former Republican presidential candidate Mitt Romney, who is black. The baby, not Mitt. 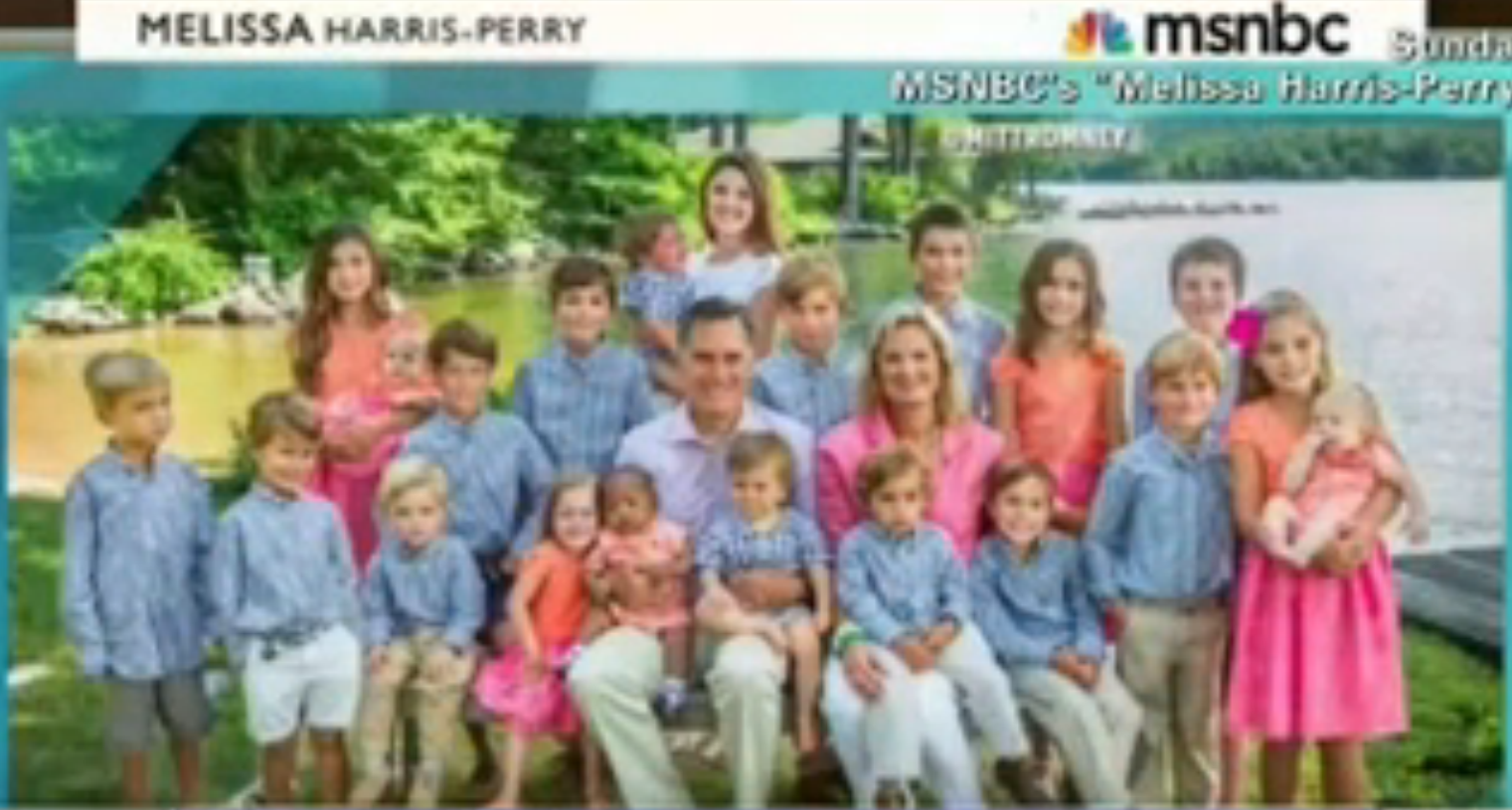 "Everybody loves a baby picture," Harris-Perry said, "and this was one that really, a lot of people had emotions about this baby picture this year. This is the Romney family. And, of course, there on Governor Romney's knee is his adopted grandson, who is an African-American, adopted African-American child, Kieran Romney."

"And that little baby, front and center, would be the one," she added.

"Doesn't belong"? She is actually telling a small child that he doesn't belong with his parents? This is monstrous of itself. But it gets worse:

Comedian Dean Obeidallah chimed in by reducing the baby to a token. "I think this picture is great," he said. "It really sums up the diversity of the Republican party, the RNC. At the convention, they find the one black person."

So the premise here is that Mitt Romney somehow persuaded his child to adopt a black baby so as to provide political cover for the GOP? The kind of person who make such an assumption is the kind of person so alienated from human feelings as to contemplate such a thing -- treating an adoption as a political maneuver, not as an act of love, an opportunity to nurture a future generation.

Caleb Howe of The Right Scoop picked up on a subsequent outrage, this time on CNN:

On CNN today a segment aired regarding the remarks made by the panelists on MSNBC'sMelissa Harris-Perry. Host Don Lemon played the clip and went to his two panelists, Ana Navarro and Marc Lamont Hill for their remarks.

Marc Lamont Hill: "Some would say maybe that it's an exploitative picture that they're exploiting the kid by hauling out this black person ..."

Please note the New Rule in Hill's comments. Taking a family photo with a member of your family is exploiting that family member. Using that photo to make fun of republicans as racists is not exploitative at all, it's just clean harmless horsing around. Why any second now Hill is going to snap a towel at Mitt in the locker room and oh, how we'll laugh. Good times.

Not for nothing here, but in order for it to be exploitative, wouldn't it need to have some degree of visibility? This photo wasn't exactly plastered on posters in Times Square. It was, in fact, sort of difficult to find online.

Hill goes on later in the segment to say, in response to host Lemon's comments that the panel was using a baby to score points, that "you could argue that [the Romneys] were using a baby to bring attention to their political progressivism." So again, it's really Mitt Romney who is at fault for his son adopting the kid. Because he only did it to get off the hook for being so super white and republican!

For people like Hill, Harris-Perry, Glenn and Obeidallah, race hatred trumps human feeling and the need to nurture the next generation. Adoption is a beautiful thing, and act of deep love and care, and trans-racial adoption, colorblind and loving, is a high expression of humanity. Keiran Romney is a symbol of human love, but to these race mongers, he is nothing but a symbol of a racial divide that can never be breached, a child who deserves mockery because of who adopted him.

They are sick and shameless.

Update. Evidently, Melissa Harris-Perry is not completely shameless. She tweeted:

I am sorry. Without reservation or qualification. I apologize to the Romney family. #MHPapology

Now that she realizes she has incited hatred, it is time for her to retire from broadcasting and enter a period of self-reflection. She has for too long broadcast hate-based material. On the very same broadcast for which she has apologized was this gem (via the New York Daily News):

Panelist and comedian Judy Gold commented on Texas Sen. Ted Cruz, expressing her dismay that the Republican was the father of two daughters, Catherine and Caroline.

"Men like this ... they have daughters. That disturbs me," she said, chiding Cruz and conservative Republicans for being anti-women.

If Harris-Perry had any self-refelction, she would realize that this, too, is inhuman mockery, based on nothing more than demonization of those with whom she disagrees politically as sub-humans. It targets children, and suggests that they are being abused by their father. This ought to be out of bounds. Instead, Harris-Perry has a pattern of of inviting on people prone to such outrageous epxressions of hate, and allows them to epxress it on her show. If she really means her apology, then she should retire and spend some time among thiose she has demeaned, in order to overcome her race-based hatred.