Warning: mysqli_free_result() expects parameter 1 to be mysqli_result, bool given in /var/www/html/americanthinker/admin/common/functions/func.general.php on line 126
 President Barack Obama built that - American Thinker
« Maybe the young and healthy will all sign up for Obamacare at the last minute | And the media tells us that the GOP is angry and divided? »
|

Who says President Barack Obama (D) hasn't accomplished anything?  Not Global Language Monitor, an Austin, Texas based firm helping clients protect their branded products.   Analyzing the number of times a word has been used, they have announced http://www.languagemonitor.com/ that thanks to the spectacular failure of Obamacare, 404, the internet term for not found, error or system failure is the top word.  Out of the 10 top words, six gained negative prominence under the Obama administration.

404 was followed by fail, hashtag, @pontifex, and the Optic.  Rounding out the top ten were surveillance, drones, deficit, sequestration, and emancipate.  404 is the near-universal numeric code for failure on the global Internet, augmenting its original use as 'page not found'.  The single word fail is often used together with 404 to signify complete failure of an effort, project, or endeavor.

...said Paul JJ Payack, President and Chief Word Analyst of the Global Language Monitor.  "The recent ObamaCare launch debacle in the US is only a representative example of a much wider system fail, from the political deadlock in the US Government, to the decline of the dollar, to the global web of intrigue and surveillance by the NSA, to the uncertainty regarding the European Union, and the on-going integration of China and other rising powers, such as India and Brazil into the global economic system."

Yep, that about sums up the Obama administration--total system fail. 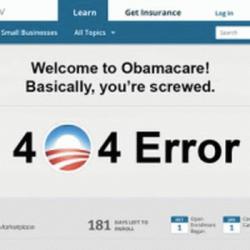