Warning: mysqli_free_result() expects parameter 1 to be mysqli_result, bool given in /var/www/html/americanthinker/admin/common/functions/func.general.php on line 126
 Obama offers fauxpology for 'situation' - American Thinker
« ObamaCar.gov | The Great Cave: Iran and the West to ink nuke deal »
|

Using lawyerly care in choosing passive-construction words, President Obama last night apologized for something, but most definitely not for lying to the American people in order to sell his health care plan on false promises and get re-elected. Here are the words he uttered to Chuck Todd, White House correspondent for NBC, friendliest news agency among the progressive media toadies.

"I am sorry that they, you know, are finding themselves in this situation based on assurances they got from me." 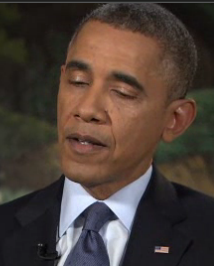 Apologizing that people find themselves in a situation is not the same thing as apologizing for lying. And the situation that people find themselves in (losing their health insurance) is not the result of his assurances, it is the result of the law itself. Only if one connects several dots, realizing that the only reason the law passed and the regulations got written by Kathleen Sebelius is because people believed his lie, does the sentence make any sense at all. By leaving out the part about lying, the president vitiated the apology.

President Obama also claimed that administration officials "weren't as clear as we needed to be." This is itself another lie, as Charles Krauthammer aptly observed:

"He said, if you have your plan and you like your plan, you will keep your plan, period," Krauthammer, a syndicated columnist and Fox News contributor said. "The punctuation is the key here. No context, no caveats, no exceptions, that's what the word period means. He couldn't have been clearer, and for him to pretend he wasn't is simply appalling."

The president came close to admitting that Obamacare is a flawed law, needing revision:

This would seem to open the door to legislation revising, if not repealing Obamacare. But almost certainly, this president who believes that he can  modify and even suspend laws passed by Congress that he is sworn to faithfully execute, would be loath to allow the GOP_dominated House the chance to tinker with what his supporters like to call "settled law."

Update: Perhaps the most egregious moment of the interview was when Obama cast himself as the victim, saying "I've been burned by a website." He quickly added that the American people had also been affected, but the reveal was there. He's the victim.

You can watch the entire interview with Chuck Todd here.

One note on media coverage of the fauxpology: most outlets, including NBC News itself in its online transcript, have cleaned up the president's words, omitting his "errs," and "you knows." But not the Washington Post's Juliet Eilperin and several other outlets. For tea leaf readers, this is evidence that some of the establishment media have gotten fed up with the lies and are no longer as actively covering for Obama. A small point, but something to keep in mind, because the problems with Obamacare are not only not solved, they have only just begun.