Over at The Atlantic, Ron Fournier -- the editorial director of National Journal -- argues that the Republicans are "The Party of Zilch."  As part of his rationale for why the GOP "stands for nothing," Fournier states that "[t]he country needs to tame a massive debt that will be 100 percent of the gross domestic product by 2038 unless Congress raises revenue and trims entitlements. No, says the GOP."

Here is a news flash for The Atlantic: the American gross federal debt already exceeds 100% of GDP.  No need to wait until 2038; it is currently at 106.5% of GDP, and still rising. 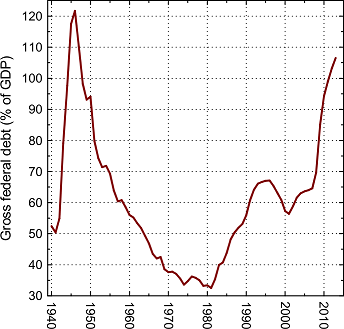 Perhaps the GOP is just 25 years ahead of the Democrats in terms of understanding exactly when America's debt will exceed 100% of GDP -- as in last year.  The GOP leadership are frustrating at times, but they deserve pity for having to deal with an opposition that apparently doesn't even fully comprehend the magnitude of the country's true current debt burden.