Much has made in conservative circles -- probably far too much -- about the falling American labor force participation rate (LFPR) since Obama took office.  In reality, the LFPR (which currently stands at just under 63%; see chart below) has been falling since the period from late 1996 through early 2001, when it was at the historic high of 67%. 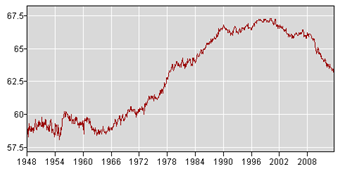 Should we be concerned if 37% of the potential workforce is currently not participating?  If so, why?

If these individuals both desire and need employment, then valid concerns exist.  But perhaps the economy -- and society in general -- operates better at lower LFPRs, and we should seek to structure our socio-economic framework accordingly.

Those bemoaning a declining LFPR rarely, if ever, discuss what an optimum LFPR is.  Should we aim for 100% participation?  Or some other value between the current level and 100%?  Can an optimal LFPR be justified?

Looking at the trend in LFPR since the Bureau of Labor Statistics' records began in 1948, a Gaussian "bell" curve is evident.  The LFPR was essentially constant between 58% and 60% from 1948 through 1965, after which it began its long march upwards in classic Gaussian form to the 1996-2001 maximum, after which a similarly Gaussian decline has occurred.  The LFPR is now at the same level it was back in late 1977/early 1978.

Basic questions need to be answered by the LFPR doomsayers. 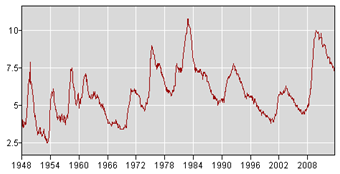 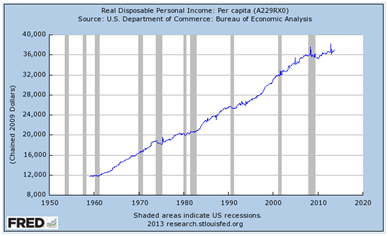 From a social perspective, the late 1940s through mid-1960s were far more conservative.  Nuclear families were the norm.  Divorce rates were very low, and they started to increase rapidly at the same time the LFPR also began its upward climb.  Property and violent crime rate trends over time also closely follow LFPR trends.

Fiscal conservatism was also predominant.  Public debt was in freefall after the World War II peak.  The government spending balance was in surplus.  Government occupied a much smaller proportion of the economy (in the 12-20% of GDP range during the late 1940s and throughout the 1950s, rising to just under 30% for the first half of the 1960s.  It is currently at 42%).

There are, of course, strong demographic drivers for a declining LFPR.  The share of the population aged 15-64 also tracks trends in the LFPR, and it is in decline. 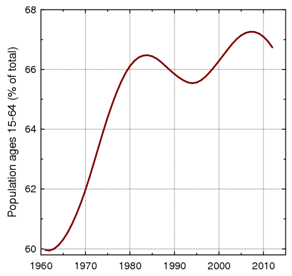 Correlation isn't causation, but causation requires correlation.  From a general conservative perspective, life was better when LFPRs were lower.

Conservatives need to start re-examining some overly simplistic talking points with regard to LFPRs.  Not only is a lower labor force participation rate demographically inevitable, but perhaps it is also more socio-economically stable.  Rather than advocating for a socio-economic structure that attempts to raise the LFPR back up to its historic highs during the liberal late 1990s, maybe those on the right side of the political spectrum should be looking at socio-economic structures that support LFPR levels last seen during the more socially and fiscally conservative late 1940s through mid-1960s.