Warning: mysqli_free_result() expects parameter 1 to be mysqli_result, bool given in /var/www/html/americanthinker/admin/common/functions/func.general.php on line 126
 Shutout in Nairobi - American Thinker
« Will Kurt Mix, Criminal Defendant in the BP Deepwater Horizon Incident, Go Free? | Can Tina Fey see the future from SNL? »
|

As the fog of combat dissipates from around the Westgate Mall attack, it has become apparent that this is yet another case where the authorities fell apart in the face of the terrorist challenge while alert citizens and tourists saved what there was to be saved.

Despite the impressive appearance of Kenyan army troops and special forces in the their combat gear and shiny AKMs, their actual performance was appalling. According to the Telegraph, despite up to a year's warning that an attack was being planned, no effort was made to work out a plan of defense, establish coordination between units, or even arrange a minimal defense of the place.

No radio contacts were set up between the units. No overall command had been appointed, and different commanders squabbled. A senior policeman was shot dead in a friendly-fire incident. Chaotic gunfire streaked across the mall's open spaces.

The military's first action was to disrupt an already present armed unit that had cornered the terrorists in one section of the mall. (More on that later.)

Kenyan commanders refused to accept advice from experienced counterterror operatives both on scene (Israelis from the Nairobi embassy) and rushed in from the UK. One Kenyan officer disdainfully dismissed the wazunu (whites), evidently in an effort to hog the glory for African forces.

Kenyan troops continued trying to bull through the main entrance, repeatedly being driven off by snipers. When they at last got inside, some marksman with an RPG brought a third of the structure down while firing at the terrorists. As a final insult, the "White Widow," Samantha Leuth-waite, escaped free as a bird by dousing her clothes with blood and posing as a sobbing victim.

The response of everyday civilians could not present more of a contrast. A vacationing SAS trooper armed with a pistol (which may stretch the "civilian" definition, but only slightly) dueled with al-Shabab gunmen while shepherding hundreds of shoppers to safety. Early reports from the Daily Mail featured pictures of this man helping two women from the mall and stating they were "family members," completely overlooking the automatic stuck in the soldier's belt. (There are also reports that a former Irish Ranger carried out a similar rescue, but I suspect this was the same man.) 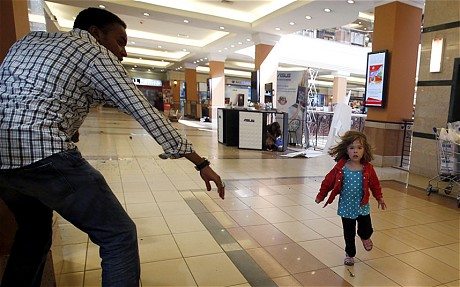 The most iconic image to come out of the attack also involved a civilian volunteer. Abdul Haj, a local businessman, arrived at the mall to assist his brother just in time to scoop up four-year-old Portia Walton and carry her to safety.

But the civilians' crowning achievement involved that armed unit that was holding the al-Shabab at bay until the Keystone Kenyan army arrived. This was a Kenyan Hindu neighborhood patrol that converged on the mall with their pistols, forcing the terrorists to retreat. Kenyan officers apparently felt it was more important to disperse the pesky civilians rather than stop the Jihadis from breaking out. This blunder transformed the attack into an eighty-hour siege.

It's all of a piece with previous incidents in which the authorities either allowed the terrorists to penetrate in the first place or bungled the response, leaving civilians to act as the last line of defense. The Transatlantic shoe-bomber , the attempted Detroit airliner bombing, Fort Hood, and the Boston Marathon bombing all featured civilians or off-duty personnel stepping in once defenses had failed, and doing so successfully in all cases except at Fort Hood, where the killer was taken down by the police.

Several years ago on AT I suggested that such attacks would occur at American malls. With the success of the Nairobi attack (and it was a success, don't let anybody kid you about that), this has become inevitable. The White Widow may be visiting your town shortly. Every mall in this country, without exception, should have an appropriate greeting committee for her. It has become obvious that the authorities, no matter how many Snowdens they hire, how many fancy algorithms their code rats concoct, and how many APCs are parked in the municipal garage, simply aren't up to the challenge. But we do have a resource that has proven successful: the people as a militia. When will we learn to use it?