The Environmental Protection Agency (EPA) has set out on the next step to make certain coal never sees the light of day. Approximately 36 coal-fired power plants would be the immediate victims. Newspapers and liberal blogs are certain to applaud what the EPA is about to do and support that agency's claim it is all part of an effort to prevent Global Warming (AKA Climate Change). Many laymen will be willing to go with what they read, trusting that it is correct and unwilling (or unable) to check for accuracy or factual truth. In some ways this submission is preaching to the choir, but the following facts might be useful to the choir provided it is willing to sing its shocking lyrics to the environmentalists.

For each of the past 64 years British Petroleum (BP) has produced an annual Statistical Review of World Energy. The review covers reserves, production, and consumption of oil, natural gas, coal, nuclear, hydroelectricity, and renewable energy and of CO2 emissions for every meaningful country in the world. It is internationally respected and is a valued source of information. The following figure is the CO2 emissions derived from the current BP review data. 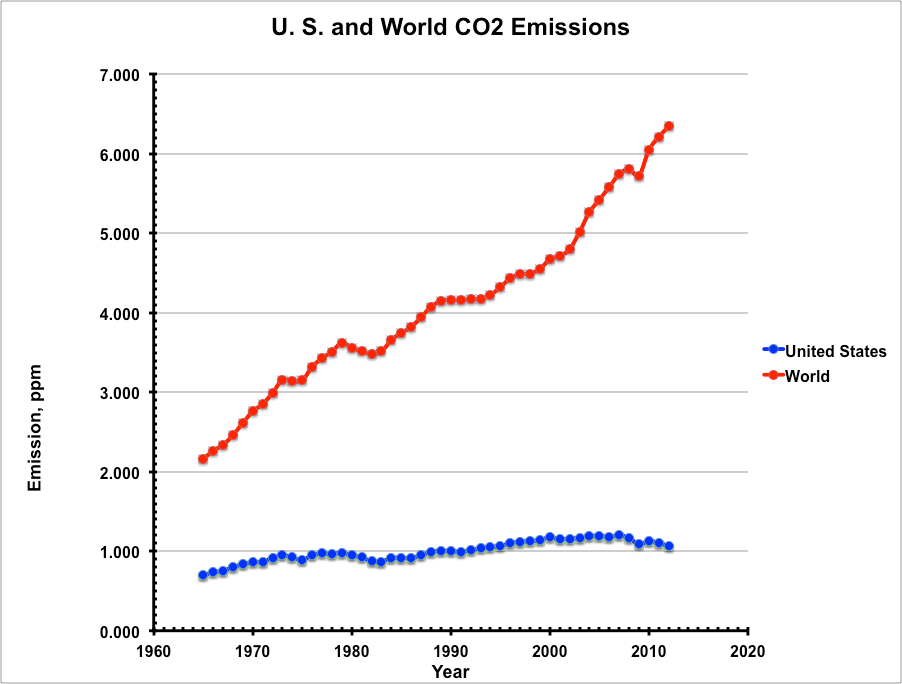 The U.S. annual CO2 emission is small compared to the world, about 17 % in 2012. Since 2007, when the U.S. CO2 emission reached a peak of 1.2 ppm, the 2012 value has dropped to 1.065 ppm, an 11% decrease. Meanwhile, world emissions have increased by the same amount. Inspection of the BP review data indicates that for the period from 2007 to 2012 U.S. coal consumption decreased 24% and oil decreased 12%, while natural gas consumption increased 10%. These changes appear to have occurred partly because of the new technology for natural gas recovery, but problems with the economy have also contributed to the consumption downturn.

The figure clearly shows that the U.S. contribution to world emissions is lessening and thus additional U.S. decrease in the use of hydrocarbon fuels or shifts to fuels producing lower CO2 emissions will not have a significant effect. The following are two examples showing how this is so.

Example 1: Suppose that overall U.S. use of hydrocarbon fuel was reduced 10%, that is to 90% of 2012 U.S. emissions. The corresponding reduction of world emissions would be 1.7%, from 6.35 ppm to 6.24 ppm. Such a world reduction is insignificant, but such a U.S. reduction would be devastating to our economy, jobs, and life style. It would require more than simply substituting the use of a particular hydrocarbon fuel, such as coal for another, which is the second example.

Example 2: Suppose the U.S. entirely replaced consumption of coal with natural gas. While ceasing the use of coal would reduce carbon emission the corresponding substituted use of natural gas would cause CO2 emission. The net reduction of U.S. CO2 emission would be 4.1 %. The reduction of World emissions would be 0.69 %, from 6.347 to 6.303 ppm. The reduction, 0.044 ppm, is about half of the current measurement uncertainty, 0.09 ppm. So it could not be detected and is meaningless.

The crux of the matter is that pending new EPA coal regulations do not measurably affect CO2 emission and thus climate change, whether anthropologically or naturally caused. What the regulations do accomplish is pandering to the nonsense of environmental religion and the tyranny of the Ideologue sitting in the White House. And yes, it does a few other things, such as force entire communities in certain states into absolute poverty and to bring on a much more vicious downturn in the economy and wealth of our republic. Like the Ideologue once said:

"You know, when I was asked earlier about the issue of coal, uh, you know -- Under my plan of a cap and trade system, electricity rates would necessarily skyrocket. Even regardless of what I say about whether coal is good or bad. Because I'm capping greenhouse gases, coal power plants, you know, natural gas, you name it -- whatever the plants were, whatever the industry was, uh, they would have to retrofit their operations. That will cost money. They will pass that money on to consumers."

Edward R. Long holds a Ph.D. in physics. He is a retired NASA scientist who is a consultant on radiation physics for space flight and on energy/climate in the Commonwealth of Virginia.