Warning: mysqli_free_result() expects parameter 1 to be mysqli_result, bool given in /var/www/html/americanthinker/admin/common/functions/func.general.php on line 126
 World Peace through Good Posture - American Thinker
« Correction on the Andy Vidak Election | Once upon a time, a man started a foundation to promote himself and.... »
|

Thank God for the entrepreneurial American spirit. Recently, Barack Obama, that epitome of good posture, pointed out that Vladimir Putin -- that is, when he's not wrestling Judo champions or while swimming in frozen rivers breaking through six inches of ice with his bare triceps -- carries himself poorly.

In response to Putin's general disinterest in anything Barry has to say, rather than admit the Russian president has no use for his drivel, Obama explained Vladimir's bored look this way: "I know the press likes to focus on body language, and he's got that kind of slouch, looking like the bored kid in the back of the classroom. But the truth is that when we're in conversations together, oftentimes it's very productive." 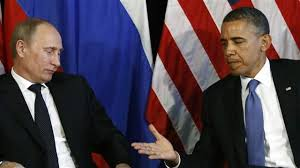 Did the president ever consider that Putin is probably on the verge of tears listening to Mr.Know-It-All didactically rambling on about things he knows nothing about? As for the president's "oftentimes... productive" claim, that probably happens only on the rare occasion if and when Barack finally shuts up.

Nonetheless, if it's slouching that the president feels sends a message to the world that Vladimir Putin is bored stiff whenever Obama speaks, maybe enterprising entrepreneurs can help to further world peace.

For instance, how about that innovative Lumo Body Tech device called the Lumo BackSmart Posture sensor band that sells for $150? This little gadget may be the very thing that could potentially mend diplomatic fences by helping Mr. Putin adjust that slouchy attitude he always has when Obama's around.

If Putin's even interested, the sensor would work like this: prior to being in Obama's presence Vladimir would strap the vibrating piece of machinery around his lower waist. The LumoBack would track the Russian president's posture and use vibration to nudge him to sit up straight whenever he slumped in his seat. It's worth a try, because a slouching Putin suddenly exhibiting better posture has the potential to singlehandedly force the resurrected Cold War into an extended hiatus.

According to the manufacturer, the LumoBack is made of stretchy nylon. The device rests at the small of the back, measures 3.9 inches by 1.6 inches, is 0.3 inch thick, and is worn under one's clothes. That's perfect, because if Putin agrees to wear it when Mr. Obama is around, he'll be able to dupe the world into believing that he's hanging on his nemesis' every word.

If a nonpolitical LumoBack user exhibits bad posture for more than four seconds, in 11 seconds they're shaken into compliance. LumoBack also uses Bluetooth to interface with a free app that runs on Apple's iOS devices. That way, if a user's iPhone app is activated, notifications appear on the screen saying things like, "You've been sitting in that chair for 30 minutes. Stand up for yourself!"

In Vladimir Putin's case, if Barack Obama should drone on and on about Syria, Edward Snowden, missile defense, and gay rights, the Russian president could "Stand up for [him]self" by pre-programming the app to wake him up with a cue that says something like, "Mr. Putin, you've been sitting in that chair enduring this torture for 30 minutes; the next time this character yawns, lose that slouch, stand up, and sprint to the nearest exit."

Jeannie hosts a blog at http://www.jeannie-ology.com/