Obama wants us to trust him on Syria

A rumor is going around Washington that the President is "consulting" with Congress about what he plans to do (or what he would like to do or what he will do in the near future) in response to what John Kerry has called the "moral obscenity" of the sarin gas attacks on civilians in Syria.

For those who haven't investigated just what sarin gas is, it is a so-called nerve agent.  Once inhaled, it attacks the nervous system of the victims, in other words it affects the muscles.  Within a few seconds of sarin gas exposure, victims will start to experience eye pain, drooling, weakness, vomiting, diarrhea and irregular heart rates. If exposed to a large amount of sarin in either gas or liquid form, victims can experience more severe and painful symptoms such as convulsions, paralysis, and loss of respiratory functions. Death will usually occur as a result of asphyxia due to the inability of the muscles involved in breathing to function.  In short, a victim would die from not being able to breathe.  It is not instantaneous.  It is not painless.  And the victim is conscious during the entire process. 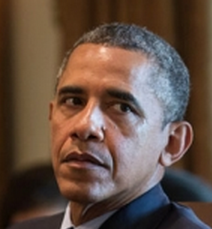 Claiming that there has been a moral outrage, or some other poetic phrase, in order to excite a feeling that some sort of retribution is called for is pretty much standard operating procedure for our President.  Blaming someone or something else for what Obama wants to do is also a standard administration operating procedure.

The Benghazi massacre was the fault, for example, of an inept film maker in California that incited untold numbers of heavily armed "protesters" to invade our consulate, or diplomatic facility or whatever the current White House talking points call for, and kill our ambassador, then drag him through the streets of Benghazi.

Only after lengthy and contentious Congressional inquiries did the citizens of America learn that not more than a handful of people in Benghazi, had ever seen or even heard of the video that was being blamed for prompting the attack.  But in the days and weeks immediately following the assault, Obama and his faithful minions kept toeing the line that it was the video.  The video was to blame, so vote for me.  Al Qaeda is on the run, so vote for me.  Osama bin Laden is dead, so vote for me.

We were also told that those responsible for the "moral obscenity" of Benghazi would be held accountable.  After the next election, no doubt.

Of course the President has told us many things, beginning even before he was sworn in as President.  Remember, "If you like your doctor, you can keep him."   Or perhaps "It will not add one dime to the deficit."  You might also remember, "The NSA does not spy on Americans."

But no matter how many, shall we say, "inaccurate statements" Obama has made, people keep falling for them.  In the present situation, where an act of war is being contemplated against a feeble enemy (just the kind of situation the President is confident with), this particular feeble enemy has two fairly robust allies, Iran and Russia.  Unlike other situations, the repercussions of successfully "conning" the Congress and the American public could be disastrous.  If the Russians supply Bashir al Assad with anti-ship missiles, and one of our ships in the Mediterranean were damaged or sunk with the loss of American lives, who does Obama plan to arrest and blame?

Before Congress approves any military action against a nation-state that is not directly and immediately threatening the United States, a full and robust debate should be taking place in both the House and the Senate.  Members in both houses should tell the leaders of both parties that this is not the time, regardless of the "moral obscenity" of the crisis, that warrants a straight party line vote to support our inept foreign policy establishment without questioning the motives, goals, strategic threats in the form of potential terrorist style counter-attacks and what the end game of this adventure that Obama is planning might be.

Jim Yardley is a retired financial controller, a two-tour Vietnam veteran and writes frequently about political idiocy, business and economic idiocy and American cultural idiocy.  Jim also blogs at http://jimyardley.wordpress.com/, and can be contacted directly at james.v.yardley@gmail.com