Liberals will believe anything if you call it a 'study'

Yesterday saw two ridiculous claims accepted by leftists in government and media, backed by purported "studies." President Obama claimed that the Keystone XL Pipeline would produce on 50 jobs. And he has doubled down despite criticism even from usually friendly "fact-checkers."

Meanwhile, liberals in the left wing media, led by the HuffPo, are citing a "study" claiming that doubling the wages of McDonald's workers would only result in a 17% price rise: "Doubling McDonald's Salaries Would Cause Your Big Mac To Cost Just 68¢ More: Study" headlined the story by Christine Fairchild, citing a study by someone described as a "researcher at the University of Kansas." Ms. Fairchild later had to acknowledge that author Arnobio Morelix "is registered as a undergraduate student at the university, according to University of Kansas School of Business Communications Director Austin Falley."

A not particularly bright undergraduate, it turns out. As in laughably ignorant about the nature of the business McDonald's is in. Tom Maguire of Just One Minute does a commendable job explaining the utter stupidity of the mistakes Morelix made in his study.

Morelix looked at McDonald's 2012 annual report and discovered that only 17.1 percent of the fast-food giant's revenue goes toward salaries and benefits. In other words, for every dollar McDonald's earns, a little more than 17 cents goes toward the income and benefits of its more than 500,000 U.S. employees.

Thus, if McDonald's executives wanted to double the salaries of all of its employees and keep profits and other expenses the same, it would need to increase prices by just 17 cents per dollar, according to Morelix.

There is a fundamental flaw here. McDonald's owns some of its outlets, but the vast majority are run by franchisees. Most of McDonald's income comes from franchise fees. The bulk of the actual labor costs involved in producing meals are paid by fanchisees. This labor expense does not appear on McDonald's P&L statement.

Morelix and the HuffPo would get an F for a paper like this at any reputable business school. Obviously, neither he nor the HuffPo people even read the entire annual report. They should begin by reading Maguire's careful and logical explanation. He estimates, based on the data in annual report about company-owned restaurants, that 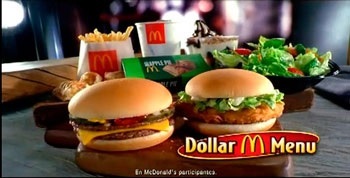 p[rices would have to rise by 26%. But even this estimate nis based on the incorrect assumption that the price rise would not cause the company to lose business. McDonalds knows better, because their empahsis on low-priced meals is obvious to anyone at the drive through window. Lots of people go there because it is cheap. Raise prices by more than a quarter, and many will leave.

Nevertheless, Lefties like Think Progress and Rep. Keith Ellison are touting this dim undergraduate's ignorant analysis as evidence that McDonald's can afford to pay more.