Making even 50 gr. of meth in China will earn you a death sentence. The meth maker, handsome Timmy Choi (Louis Koo), is a kingpin producing tonnes in various labs strategically placed throughout the country. An unexpected 'work accident' explodes one major lab, killing the drug-lord's wife and brothers, and pockmarking his face like some weird type of venereal disease. He finds himself in the custody of gimlet-eyed Captain Zhang (Sun Hoglei). To avoid certain execution, Choi turns informant... or does he?

The police have a 72-hour window to land their guys, compressing their meticulous work-design into a chaotic, sleepless 3 days. Events do not go per plan. It is not clear who has the upper hand. If anyone. 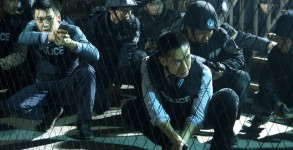 For those who enjoy a good underworld production, master director Johnnie To has produced a raft of Hong Kong thrillers: Election, Triangle, Exiled, Breaking News, PTU. This is his first "mainland" effort. Its sleek dynamics, high-tech police procedural profile, excellent cast, strong villain and antagonists, plus a diverting multilayered story make it a standout. There are pockets of situational humor in the spectacle of [amusing] brother deaf-mutes handling the manufactury, eating and being companionable with each other as mayhem extends all around. Unless they see it, they are imperturbably on the commode or eating noodles. The various henchmen sampling their own wares provide subtle pictures of being high in latter-day traffic jams or overnights.

DW evokes many shoot-out films in recent memory -- including, for a brief pass, Bonnie & Clyde, for its immaculately choreographed crashes and gunfights -- but it heeds the dictum to make events specific and intense among the bad guys and nervous undercovers, not glossed over -- the scenes in the meth factories, the scenes in garages and exquisitely appointed gang bosses' homes, on the road in the trucks, cars, and rambling assorted vehicles for the acquisition and deposition of drugs, or in back alleys, shipyards, or the bigwig criminal-boss sit-downs with the menu of foils and would-be near-gang leaders, are well observed. Laconicism is both expected and interesting. The investigators play many roles, and do an incisive job in all their guises as they implacably track their pigeons and potentates.

The cinematography is keen and never boring, the women do their part without histrionics or overacting, the characters are acutely plausible -- the whole was an above-average thriller for almost all demographics. As the shootouts continued balletically, one felt there was both a comic opera element as well as ultimate Grecian tragedy playing out in parallel to the narrative we are presented with. Notable sophistication in technical matters made the film even more delightful, as old and new interplayed amongst the protagonists. Not for the excessively faint-hearted, as it features drug use and pyrotechnic swipe-outs, substantial movie violence and wracking bouts of nastiness. But it rewards the crime-thriller devotee with taut plotting, intricate action, and incidental geography and modern-day Chinese customs and living. It caused a buzz-storm of controversy when released in its natal PRC homeland.

A genre film, one might say, but a superior example of what the genre can offer in the best hands.