Warning: mysqli_free_result() expects parameter 1 to be mysqli_result, bool given in /var/www/html/americanthinker/admin/common/functions/func.general.php on line 126
 The Perfect Progressive Candidate - American Thinker
« Beaten and imprisoned by thought police | Obama and the Europeans »
|

You would think Britain's Guardian newspaper would be satisfied with having broken the NSA surveillance story, but apparently their ambitious editors have decided to keep up the pressure on their competitors.  Now comes this:

It started as a joke between friends, but Morris the cat's bid to become mayor of the Mexican city of Xalapa, the capital of the state of Veracruz, has now turned into a social media phenomenon with a serious message about political disenchantment.

"Morris has become an expression of how fed up people are with all the parties and a political system that does not represent us," said Sergio Chamorro, the owner of the furry black-and-white candidate whose first campaign slogan was: "Tired of voting for rats? Vote for a cat."

The cat is apparently building quite a following.  Before we get too excited about this "protest candidate," however, it may be worth considering whether the Guardian has missed the real import of this story.  Far from being a rebellious joke at the expense of the political class, it seems to me that Morris the cat's claims of sticking it to the system just might be the progressive globalists' most brilliant psy-ops scheme yet.

Think about it: this candidate is half black and half white.  He has no known past, and no significant voting record.  His political career "started as a joke between friends" -- i.e., he has been managed, groomed, and used as a front for hidden backers from the very beginning.  These handlers are presenting him as "an expression of how fed up people are with all the parties" -- as an anti-establishment voice with a fresh perspective who will overcome partisan division.

As an expression of how new, young, and fresh this cat is, Morris's owner, Sergio Chamorro, says, "The truth is that Morris no longer belongs to us.  He belongs to his fans."  Fans?  Not supporters or voters?  That's the clever strategy, you see: portray Morris as a transformational figure, someone who transcends "mere politics," a candidate who is not so much a politician as a star, with followers and fans where others have only voters.  I'm sure we'll start hearing stories about "fans" fainting at his rallies.

An outsider?  A transformational figure?  A historic candidate?  Think again.

Consider, for a moment, the cat: self-indulgent, preening, demanding, capriciously ruthless in stalking and killing weak creatures, and adept at hiding anywhere and everywhere and pouncing when you least expect it.  Cool and aloof in a manner that suggests a superior air and high intelligence, the cat is in fact almost impossible to train, being much less intelligent than the loyal and trustworthy dog he despises, and whom he belittles among his fellow cats as "clinging to their bones and their masters."

The perfect progressive candidate.  Why stop at mayor?  I'm sure before the Xalapa election, David Brooks will write a piece in the New York Times announcing that he has developed a fetish for Morris' whiskers, which "are combed out in a manner that tells me that this cat will become mayor, and that he will be a good mayor."

And, for further evidence that voters ought to be more circumspect about jumping on the Morris bandwagon, what would a Marxist manipulation campaign be without its own iconography, preferably in a style reminiscent of socialist realism or a 1930s propaganda poster? 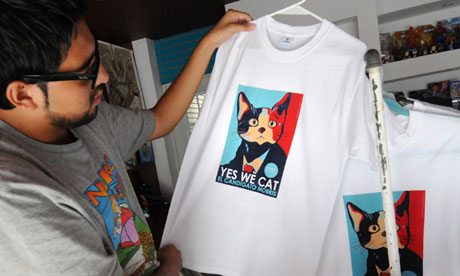 Message to Xalapans: if you aspire to being free as a bird, keep your distance from Morris and his ilk.  And if he does happen to win, build your nest in the tallest tree you can find, and don't let your nestlings out of your sight.