​During the summer of 2012 in the heat of the climate hysteria over the US drought, Seth Borenstein-- apparently the "Associated Press science writer covering astronomy, climate, & disasters" and an instructor at "NYU's DC campus" -- sent out the following tweet: 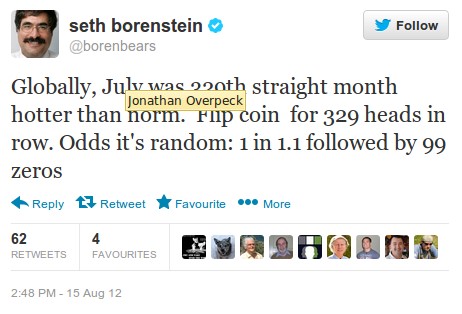 See any basic statistical problems with analogizing coin flipping to climate patterns? There is a major one: independent vs. dependent events.

Let us quote some relevant text from a university website on the topic at hand:

"People often misunderstand the notion of independent events. This is a probability term meaning that past events have no influence on future outcomes. For example, when flipping a coin four consecutive times, the probability of getting four heads is: (1/2)(1/2)(1/2)(1/2)=1/16.

Gambling card games are not necessarily independent events. If the cards are not replaced into the deck, then probabilities change depending on which cards have been dealt. For example, the probability of being dealt an ace from a standard deck of 52 cards is 4/52 or 1/13. However, if the first person is dealt an ace, the probability that the second person will also be dealt an ace is now 3/51, if the first ace is not replaced into the deck. This applies to all card games, particularly Poker."

Here's a novel concept for climate alarmists and journalists (and particularly the combination thereof). The odds of any one month being hotter or cooler than 'normal' (nevermind a rigorous discussion of what a 'normal' climate really is) is not an independent event. It is a dependent event, and it depends on the previous months, because the planet (and all its climate sub-regions) goes through cycles (having various lengths, magnitudes, areal extents, etc.) of warm and cool periods. That is basic science and statistics.