Warning: mysqli_free_result() expects parameter 1 to be mysqli_result, bool given in /var/www/html/americanthinker/admin/common/functions/func.general.php on line 126
 Advice to the young: social media is forever - American Thinker
« 'They are afraid of being killed by Muslims.' | Hasan to Use 'Defense of Others' Strategy »
|

Advice to the young: social media is forever

Ok, young ones, here is your lesson for the day:  never put anything on any form of social/electronic platforms that might embarrass you--or worse--when you're over, oh, 30.   Remember, once it is out there, it lives forever.

For example, look what happened to the adolescent Barry Hussein Obama who proudly posed puffing a marijuana cigarette during prehistoric times, that primitive era before facebook, without twittter or other social media.  What does the now prominent, well over 30, President Barack Hussein Obama (D) think of that photo today?  Perhaps we'll soon find out.

White House adviser David Plouffe, who ran both the Obama presidential campaigns, thought he would demolish Rep Darrell Issa (R-CA), chair of the House Oversight and Reform Committee, who is persistently questioning the White House's version of the IRS singling out conservative groups, with a few tweeted words.

The former is a reference to ultimately dropped charges that Issa stole a Maserati 40 years ago; the middle to a suspicious fire in his warehouse 30 years ago; the latter to Plouffe's opinion of Issa's work in Congress today.

The National Review's Jim Geraghty punched back with

For perspective, here's what Plouffe's most famous client was doing when the charge against Issa was dropped: 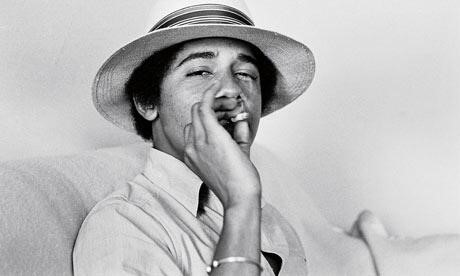