Warning: mysqli_free_result() expects parameter 1 to be mysqli_result, bool given in /var/www/html/americanthinker/admin/common/functions/func.general.php on line 126
 Locked out--semi looking in - American Thinker
« Why Has Conservative Media Ignored Michelle Rhee's Connection to Common Core? | Concerns over the unknown costs of ObamaCare killing immigration reform »
|

Hey all you tourists locked out of touring President Barack Obama's (D) newly sequestered White House--there is good news on that front.  Sort of.  You see, Michelle Obama understands. While out hustling "her" book "American Grown: The Story of the White House Kitchen Garden and Gardens Across America," published last year, she reassured the audience the taxpayer funded White House Garden is available for viewing by taxpayers. And others. Well, sort of.

"[M]y goal in this book is to share the story of the creation of the garden," Michelle Obama said during the Tuesday morning signing at Washington's Politics and Prose Bookstore, "because while it is semi-open to the public -- because if you visit the White House along the South Lawn, you can see the garden from outside of the White House."

And why can't you see it from inside the White House?  As Vince Coglianese of The Daily Caller reminded us

The Obama administration stopped allowing visitors to tour the White House grounds beginning on March 9 "due to staffing reductions resulting from sequestration."

Oh. The Daily Caller graciously provided a photo for all of those, who as FLOTUS so delicately explained,

They hear about the garden; they don't get an opportunity to see it," she said.

Visitors standing outside the fence of the South Lawn can see portions of the garden at least 100 yards away, though the view can be somewhat obscured by a wall of trees and shrubbery. 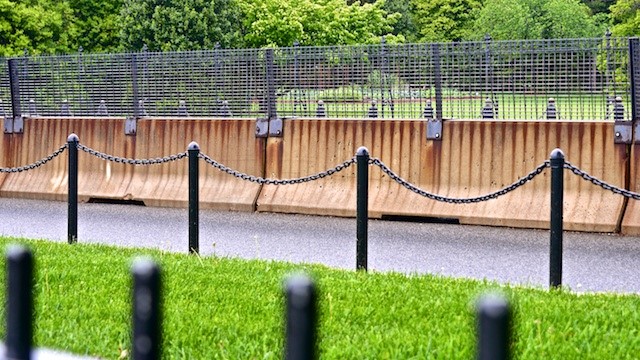