Warning: mysqli_free_result() expects parameter 1 to be mysqli_result, bool given in /var/www/html/americanthinker/admin/common/functions/func.general.php on line 126
 Media on trial, too, as Gosnell trial resumes - American Thinker
« Maduro is the real loser in Venezuela | Gun control at work: 4 dead, 21 wounded in Chicago over the weekend »
|

Media on trial, too, as Gosnell trial resumes 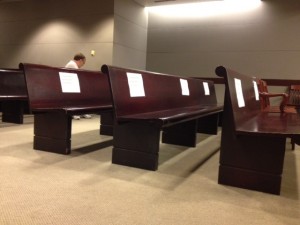 The most famous empty press section ever, symbolizing the media blackout of the sensational trial of Dr. Kermit Gosnell, may have a few occupants today when the trial resumes. The past few days have seen active shaming of the mainstream media over its specious excuses for ignoring the testimony which -- let's face it - portrays an inhuman taking of innocent lives, babies born alive, in the name of abortion. The fact the President Obama voted to allow infants to die if they were born alive after a botched abortion adds a very strong news hook, as does the horrifying lack of inspection of the abortion clinic by Pennsylvania authorities.

An honest account of the trial would find lots of "if it bleeds it leads" moments that readers or viewers would find compelling. Yet, when challenged on Twitter, MSM'ers continue to hem and haw, embarrassing themselves with their feeble excuses.

Jeff Toobin of CNN offered a preposterous explanation for the media's handling of the Gosnell case: "Well, the people making those [media] criticisms are by and large conservative. They are saying the liberal media is trying to protect abortion rights by not showing this horror show. I don't buy that at all. . . . It's a business decision. We are not operating with the political agenda here. We pick stories, by and large, for reasons that we think people would be interested. I don't think we're covering this up."

First, two former nurses at Planned Parenthood of Delaware told WPVI-TV in Philadelphia this month that conditions at the clinic there are dangerous. Jayne Mitchell-Werbrich, one of the former nurses, said: "It was just unsafe. I couldn't tell you how ridiculously unsafe it was." "They could be at risk of getting hepatitis, even AIDS," added the other nurse, Joyce Vasikonis. Channel 6 reported that both nurses were stunned "by what they called a meat-market style of assembly-line abortions." It noted that in Delaware, abortion clinics are not subject to routine inspections: "Planned Parenthood is essentially in charge of inspecting itself." Will any national reporters follow up on Channel 6's reporting?

Second, a leading Democratic candidate for governor of Pennsylvania is Allyson Schwartz, a five-term Democratic congresswoman who represents part of Philadelphia, where Gosnell had his clinic. Democrats are openly fretting that Schwartz, a passionate liberal, has political baggage. Not only has she voted against any and all restrictions on abortion, but from 1975 to 1988 she ran a women's health clinic in Philadelphia where abortions were performed. Schwartz is "a dream candidate for Republicans," one Democratic strategist told Philly.com this month before the Gosnell story erupted nationally.

It remains to be seen if the Gosnell embarrassment of the media will be enough to move coverage. The number of empty seats in the emdia section of the trial today will be the first indicator.

Update. A feeble attempt to deny media bias in the black holing of the Gosnell horrors. It's just a "banal" lack of rsources. In the WaPo's Style section, Paul Farhi writes:

The charge of liberal media bias is perhaps undercut by the fact that a number of conservative media outlets - and conservative leaders - overlooked the story, too, until a flood of tweets and commentaries about it began late last week.

The Weekly Standard and the National Review, two leading conservative magazines, for example, hadn't published anything on the trial, according to a search of the Nexis database. The New York Post's conservative editorial board has written one commentary - an editorial lamenting the lack of coverage, which, although it doesn't mention it, includes its own paper. The Washington Times has published five staff-written articles and guest commentaries on the matter, all focusing on the absence of press coverage.

Fox News has been the only consistent national TV source on the story, having run 11 news reports or commentaries on it over the past month. Among national print outlets, the Associated Press has covered the trial extensively. The story has been prominently featured in the Huffington Post and discussed on its Huffington Post Live webcast. The Huffington Post is generally considered a liberal news organization.

I must note that AT has been covering the story since January 1. As for the HuffPo, good for them! Showing the rest of the media progs the error of their ways and earning credibility with the public.