Warning: mysqli_free_result() expects parameter 1 to be mysqli_result, bool given in /var/www/html/americanthinker/admin/common/functions/func.general.php on line 126
 A Lovely Kid - American Thinker
« Writer, historian Ron Radosh guests on Moran's show | Voter Fraud: Obama Failed to Qualify For Indiana Ballot? How Many Other States? »
|

"He was compassionate. He was caring. He was a lovely, lovely kid." That's how neighbor Larry Aaronson described DzhokharTsarnaev, the younger of the two Jihadist psychopaths who carefully packed bombs with nails and ball-bearings to inflict maximum physical damage on men, women, and children they did not know. There were more bombs back home, presumably prepared to slaughter other strangers. Lovely, lovely boys.

The uncle of these terrorist brothers, RuslanTsarni, had a close relationship with the boys for many years, but it fell apart in recent years, partly because the older brother, "started carrying all this nonsense associated with religion, with Islamic religion."

When the uncle asked the older brother why he had dropped out of school, Tamerlan said, "Oh, I'm in God's business." That would be the Jihad business, the killing non-believers business. His YouTube account has a "terrorists" video section and links to his Islamist mentors. It will be interesting to see who paid him for his religious work. Dzhokhar also expressed his higher calling in two tweets last month. "Never underestimate the rebel with a cause", and "Evil triumphs when good men do nothing." 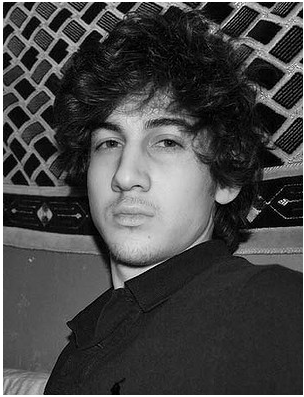 Last week, these lovely good men did something... something, in their view, to please God.

Dzhokhar was so comfortable with his actions that on the night of the massacre, he tweeted "LOL, those people are cooked" and "I'm a stress free kind of guy". The psychopath attended a party the next night.

As observers, we witnessed the standard rush of the media to name conservatives as the likely perpetrators. It was Patriots Day, Axelrod said, and you know the kind of people those patriots are. In a racist rant, Salon openly wished the bomber was a white man. CNN's Christiane Amanpour said she "hoped beyond hope that this doesn't turn out to be what it might be?"

She held that hope because it is becoming increasingly difficult for the media to sell the delusion that radical Islam is not at war with the West.

Our president rushes to judgment in every case where he thinks that will help him politically. With Gates in Boston, Gifford in Arizona, Trayvon in Florida and Benghazi in Libya, false accusations were quickly made, and in the case of Benghazi, maintained against all evidence. Yet, on the night Dzhokhar was captured, Obama was there to counsel us against a "jumping to conclusions" and to suggest that we honor "diversity". He said we must, "take care not to rush to judgment -- not about the motivations of these individuals; certainly not about entire groups of people." Certainly not.

He has the same problem as Amanpour. Sane people will make rational judgments about this case and others like it.

Sure, we will have to endure weeks of media stories about how America let these poor boys down, how we could have done more, how it is our fault. We will be told that we just don't know what motivated them. It's such a mystery.

I don't think it is a mystery to most Americans. Despite all the ostrich-like foolishness by political and media 'leaders', most of us know that war has been declared against us and we do not take kindly to "Death To America" preachers. Fundamentalist Islam is no less a threat to us than any other totalitarian ideology. They want us to submit to the coming worldwide caliphate, or die. I don't like either option. Tolerance in the face of this open threat is suicide.

Few people understand this more clearly than Andrew McCarthy. His column, "Jihad Will Not Be Wished Away", is worth reading in its entirety. Some excerpts:

We are in a war driven by ideology. "Violent extremism," which is the label the government and the commentariat prefer to put on our enemies, is not an ideology - it is the brutality that radical ideologies yield. Our enemies' ideology is Islamic supremacism. To challenge and defeat an ideological movement, you have to understand and confront their vision of the world. Imposing your own assumptions and biases will not do. Islamic supremacists do not see a world of Westphalian nation-states. They do not distinguish between Russia and America the way they distinguish between Muslims and non-Muslims. Their ideology frames matters as Dar al-Islam versus Dar al-Harb: the realm of Islam in a fight to the death against the realm of war -- which is everyone and everyplace else.

The fact that you think this is nuts, or that I'm nuts for saying it out loud, has nothing to do with whether they believe it. They do -- and they don't care, even a little, what you think.

Many lovely, lovely boys are being trained by leaders of a supremacist religion to hate and kill those who oppose their plan for worldwide domination. There is no value in pretending otherwise.