Warning: mysqli_free_result() expects parameter 1 to be mysqli_result, bool given in /var/www/html/americanthinker/admin/common/functions/func.general.php on line 126
 Vote Counts and Vampire Counts - American Thinker
« Pope Francis, give us Apologists for Catholicism | Bloomberg's Folly »
|

Recently two well-known conservative experts on U.S. voting irregularities came to speak at the Federalist Society of Mineola, Long Island. They included John Fund of the American Spectator, Wall Street Journal, and National Review, who coauthored Who's Counting?: How Fraudsters and Bureaucrats Put Your Vote At Risk. The second speaker was Grant Lally, an attorney who successfully argued the 2000 case of then-presidential candidate George W. Bush before the Miami-Dade and Orange Counties Boards of Elections, as well as later being involved in many other recount battles. Mr. Fund's coauthor, Hans von Spakovsky, was scheduled to speak but couldn't leave Washington due to weather conditions. 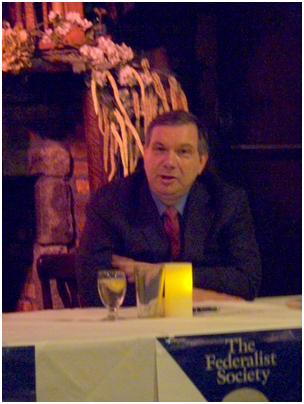 John Fund began by saying that he found that our voting system is encumbered by bureaucratic bungling as well as voter fraud which he described as "purposeful confusion." Citing the example of Long Beach, Long Island, Fund told of vote totals at a nursing home of a 100 percent Democratic turnout. After an investigation, the vote count totals dropped by one third and the Democrats then got 75 percent of the vote (that is a realistic figure). When Fund later mentioned arguments made by liberals wanting no requirement of voter I.D.s because they claimed it was a civil rights issue for minorities, he replied with the counterargument that every illegal vote was a violation of the opposition party voters' civil rights. The larger voter plurality in downstate communities like Long Beach, NY, the easier it is to have that total overcome the typical upstate Republican majorites. Later attorney Lally told of his investigation of a NY State Senate race where Democrat George Amedore was declared the winner. Students from the nearby State University at Albany were part of something called an "Opportunity Program" which allowed them to register as Albany residents, even if they lived elsewhere (such as New York City). Although Mr. Lally caught some of them, he couldn't catch enough students and others to reverse what some believe was a false election result. And once a winner is declared anywhere in the nation, it is extremely difficult to overturn the result.

What I have just described will be familiar to residents of many other locations -- and not just the "usual suspects" like Chicago and parts of California.

Returning to the example of the photo I.D., John Fund told of many Democrats arguing that asking for a voter's photo I.D. equates to racism from the Jim Crow days. The fact that every person of every ethnic group has to show a photo I.D. to get on a plane, on Amtrak, etc. -- and that 65 percent of public support for voting photo I.D. is swept aside by such activists. Fund pointed out a provision of the national Motor Voter Act that states that a voter cannot be removed from the rolls for four federal elections, i.e., eight years. That means someone can have moved away or be dead for about eight years yet still be a "zombie voter" (my term) in a given district.
Fund mentioned the topic of illegals voting as well. On page 96 of Who's Counting? it states that:

As the story by the local NBC station in Florida demonstrated , some noncitizen registrations can be detected through the jury process. The vast majority of state and federal courts draw their jury pools from voter registration lists, and the jury questionnaires used by court clerks ask potential jurors whether they are U.S. Citizens. In most states, however, and throughout the federal court system, court clerks rarely notify local election officials when potential jurors have sworn under oath that they are not U.S. citizens. (Italics are mine).

The book goes on to state that since most illegals don't have a paper trail, they don't get called for jury duty in Florida as do legal residents. Fund goes on to state that in Orange County, California, a jurisdiction that selects 85 to 90 percent of its jurors from the voter registration list, the California Secretary of State reported in 1998 that two to three thousand individuals claim exemption from jury duty because they are not citizens. Who's Counting? concludes from these facts that:

"While some of those individuals may have simply committed perjury to avoid jury service, this represents a significant number of potentially illegal voters: 24,000 to 36,000 noncitizens... over a one year period."

It is no surprise that both the book and the speakers that evening were advocates of purging the voter rolls of those who could not claim either citizenship, being alive or living in the district or state.

Mr. Fund then switched to his final topic, Thomas Perez, the latest Obama nominee for Secretary of Labor -- and why this was strongly related to identifying voters. Fund said that Thomas Perez opposes any and all immigration law, that he advocated free tuition for immigrants. Perez also was involved in the famous New York Fire Department hiring exam case, saying that blacks who failed 70 percent of the exam questions should be hired anyway. Perez was also responsible for dropping the New Black Panther voter intimidation case.

Attorney Grant Lally continued where John Fund left off. He spoke of finding "shocking incompetence, sometimes by design." Using the example of Congressman Bob Turner's (R-NY) failed reelection bid in 2012 for Anthony Weiner's reapportioned former district, Lally found that the NY Board of Elections was not purging records and had mailed thousands of ballots to dead people," mentioning that an absentee ballot fits perfectly into new voting machines, yet the ballot and computer system is not designed to exclude a mailed absentee ballot from the machine. That obviously means anyone can take an absentee ballot down to a polling place (no photo I.D. required, as has been my own New York voting experience) and simply vote as someone else -- living or dead. (Fund also stated, in response to an audience question: "I do not believe the last (2012) Presidential Election was decided by voter fraud. And there was voter fraud.")

Mr. Lally also investigated voting in the Cleveland, Ohio, area where his grandmother originally came from. He found vote totals at 110 percent of the population and various students from Oberlin College assuming the name of dead persons by simply changing the age on the voter form from 80 to 20. I guess this is the political version of Pareto's Principle, the "80-20 Rule."

Attorney Lally's talk wouldn't be complete without some details of the famous and gut-wrenching 2000 Presidential Election. One thing that happened was that a candidate named Clay Shaw was involved in a recount that started before then Gov. Bush's attorneys even arrived in Florida. But Mr. Shaw was on the same ballot with candidates Bush and Gore, so these ballots were handled and recounted with no outside Republican attorneys or poll watchers for some time, in a total denial of ballot security. Overseas UN Election Observers expressed shock at how the votes were counted. When I first heard of UN Observers at an American election, my thoughts reflexively turned to foreign interference, but it seems that these outside observers may actually nowadays be a positive influence on what goes on at American polling places.

Mr. Fund also discussed civil rights and voting, saying that it is "patronizing to say that blacks can't manage voter I.D.s because they use I.D.s all the time" (in their daily life). A prominent claim of I.D. opponents (featured in the 2012 presidential debates) states that 25 percent of blacks don't have an I.D., yet in a District Court case in Georgia, they could not find one example of someone who couldn't get to vote because of his race.
The speakers said that voter fraud was like shoplifting, in that the more people who show up to monitor the activities at the polls, the more they will scare away fraudulent voters just by their presence.

There were other stories of outrage, but I will leave you with two of Mr. Fund's suggestions: Buy a copy of Who's Counting? -- and go to the website of http://www.truethevote.org/to learn more about what you can do to insure a more honest vote -- and to answer the question in Mr. Fund's book title with one word: "me."