Sidney Blumenthal is a senior consigliere in the Clinton political machine, renowned as a ruthless hatchet man. His emails were hacked by an entity known as "Guccifer" and a tranche of emails was distributed to selected media over the weekend, according to thesmokinggun.com.  It strikes me as odd that none of the confidential memoranda have been published yet by any of the media to which they have been distributed.

We are told by TSG:

In a series of weekend e-mail blasts, the hacker known as "Guccifer" disseminated four recent memos to Clinton from Sidney Blumenthal, a longtime confidant of the former Secretary of State.

The 64-year-old Blumenthal, who worked as a senior White House adviser to President Bill Clinton, had his AOL e-mail account hacked last week by "Guccifer," who has conducted similar illegal assaults against a growing list of public figures, including Colin Powell, relatives and friends of the Bush family, and a top United Nations officials.

So where are reports of what's in those emails? 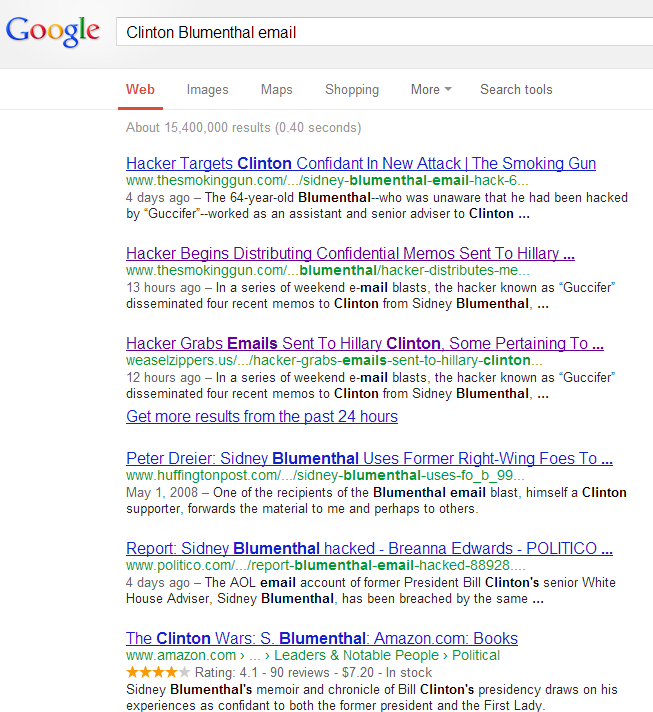 To say the least, both Rick Moran and I are suspicious. Guccifer has covered his tracks, but a Russian server figures somewhere in the pedigree of the mischief-maker. On the other hand, tech wizards can plant a false trail. It is a classic hall of mirrors, where you can't know who is doing what, much less why he is doing it. There could be a "gotcha" coming for all we know.

There is more to come. Hillary has made it clear with her switcheroo on gay marriage that she is running for the 2016 nomination. Loathing Hillary as I do, I hope there is something incriminating that comes to light, but I am not counting on it.

Sure, hacking is deplorable, but it is also a fact of life. The MSM glory in the history of purloined information, and count the stolen Pentagon Papers during the Vietnam War as a journalistic triumph.

So what is the media sitting on?