For the past four years the world has watched as the Euro Zone countries have careened from one financial crisis to another.  Each time the debacle of the day is papered over with yet another patch involving either more printing of euros, forced austerity budgets, or in the case of Cyprus (but eventually destined to occur in Spain and Portugal) the seizure of bank assets (i.e. deposits).

But these so-called fixes will never solve the problem as long as there is a death wish to maintain the euro as a viable currency regardless of the consequences.  These nations can continue to shuffle the deck chairs on the Titanic only so long before the ship hits the iceberg. 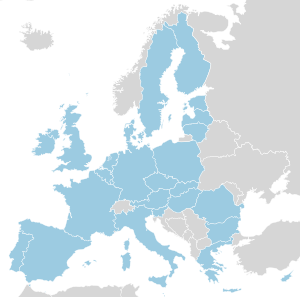 The underlying problem in most countries is Europe is that their economies can no longer generate wealth and job creation.   These nations do not have viable manufacturing or service sectors.  Instead they are overwhelmingly consumption oriented, importing not only fuel but many consumer goods from elsewhere.  Among the reasons for the spike in imported goods is that over the years these governments, in looking for revenue have taxed and regulated their industries into moving elsewhere.

As jobs become scarce there is a greater reliance on government spending on a variety of welfare programs.  All the while the tax base diminishes as joblessness increases and wealth diminishes.  The initial plan by the solons of smart in Strasbourg (the legislative headquarters of the European Union) was to force austerity on these nations in order to bring their deficits and debt down.  However, when there is no real economic growth (in fact most of these nations are in a recession again) and thus no additional revenue to the government, which must provide for so many social programs that no austerity program will achieve their ultimate goal and in fact will only foment societal unrest.

These nations are further hamstrung by being tied in to a currency (the euro) far too strong for their weak economies, making them even more uncompetitive in the global market.  Germany, whose economy is strong due to its manufacturing and export sector, can ride out the storm but its strength contributes to the weakness of other European nations tied into the Euro.

Until these nations (i.e. Spain, Portugal, Italy, Greece, and others) voluntarily opt out of the euro as their national currency and begin to get serious about rebuilding their economies, this will be a never-ending crisis repeated ever 4- 6 months until the entire house of cards collapses. Then there will be a global financial crisis.

At first glance most Americans would ask: what does this mean for the United States?  There are arcane issues concerning currency evaluations and money creation that deserve to be reviewed, however for the average American there is one important lesson: the future of the nation depends not on government or government spending but creating and maintaining a viable growing economy.  Something this nation, with this current governing class is not doing nor does it have any intention to do so.