Mitt Romney won a clear victory on points in the first presidential debate in Denver. Even Journolist conspiracy member Ben Smith, formerly of Politico and now of Buzzfeed, called the debate for Romney 40 some minutes into the debate.

Mitt Romney, trailing in the polls, needed to prove tonight that he could stand on stage with President Barack Obama as an equal and a plausible president of the United States.

He did that in the crucial first 40 minutes of Wednesday night's debate, addressing Obama respectfully, even warmly - but then tangling with a sometimes hazy and professorial Obama on taxes and deficits.

To my eyes, Obama looked uncertain and a little scared  -- especially his eyes. Romney looked far more confident and in charge. Obama's continual mention of  a Romney tax cut of 5 trillion dollars, despite Romney claiming he had no such tax cut planned, worked against the president.

Romney was aggressive, yet polite and friendly, and demonstrated a stronger knowledge of issues than the president did.

The only question is how far the polls will move in Romney's direction. And whether this weak performance by the president will demoralize his campaign. Obama appears to ahve been overmatched and outclassed.

The body language clearly sbowed Romney was in charge. Obama frequently looked down when Romney was speaking or made a point, and Romney looked right at Obama with clear eyes.

Andrew Sullivan ‏@sullydish
Look: you know how much I love the guy, and how much of a high info viewer I am, but this was a disaster for Obama. http://thebea.st/RdXvE9

On Intrade, Romney is up 5 points already, according to Richard Baehr and Ed Lasky. Ed sends this picture of glum Obama sycophant Chuck Todd: 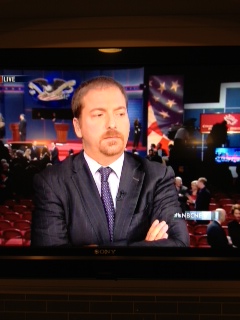 Update: Andrew Kaczynski of Buzzfeed features this video of a despondent Chris Matthews saying that if Obama has 2 more performances like this, he is finished: