Warning: mysqli_free_result() expects parameter 1 to be mysqli_result, bool given in /var/www/html/americanthinker/admin/common/functions/func.general.php on line 126
 New federal probe into Jesse Jackson, Jr.' s campaign finances - American Thinker
« Where is Big Bird When you Need it? | How Close is the Obama Administration with Israel? »
|

The Wall Street Journal has revealed that a federal investigation is targeting the possible use of campaign funds to redecorate Jesse Jackson Jr.' s home. The Chicago Sun-Times adds:

The Sun-Times reported that the investigation was being handled out of Washington D.C. and was an entirely new area of scrutiny and did not involve the sale of the U.S. Senate seat - a case involving Rod Blagojevich where Jackson's name repeatedly came up. Spokespeople representing Jackson were not talking on Sunday.

The Jacksons put their Washington, D.C., home on the market last month at a price of $2.5 million. The listing was public and included the property's address as well as multiple photos of the inside of the home. A campaign spokesman said at the time that home was put on the market to pay for mounting medical bills.

Though Jackson represents a congressional district in Chicago and his wife, Sandi, is a Chicago alderman - both primarily live in D.C. and send their children to a private school there. They also have a residence in Chicago.

A day after the D.C. listing was made public, the couple subsequently took it back off the market, citing a security issue.

How very Chicago that Mrs. Jackson sits on the city council but lives mostly in Washington, D.C.  She has a sweet set-up. But then again, apparently her husband does, as well. Mark Wachtler of the Examiner notes:

In 2009, it was alleged that Congressman Jackson Jr. was having a secret affair with a Washington DC woman named Giovana Huidobro. The news culminated in a House Ethics Committee investigation that remains underway to this day. Some speculate that the reason the Committee has delayed any findings or action is because it is aware that a corresponding criminal investigation by the FBI is also in progress.

As revealed by Raghuveer Nayak during the Rod Blagojevich investigation, Jackson and Huidobro had been seeing each other while the Congressman was in Washington DC representing his constituents. When Jackson returned to his Chicago district on weekends, Nayak testified he paid for recurring plane tickets to fly the former swimsuit model to Chicago to be with Jesse Jr. 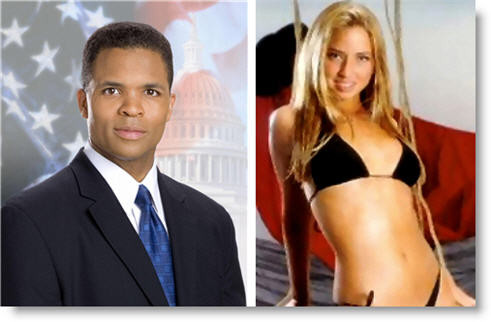 Where did that money come from? If it came from Congressman Jackson's campaign fund, or if the fund was used to reimburse Nayak, Jackson could be in serious legal trouble.