While Wednesday was President Obama's wedding anniversary, it's the American people who received a wonderful pre-gift, one month before the four-year anniversary of Obama's election: an outstanding performance by Mitt Romney in his debate with the president.  The stunned mainstream media can't even deny the fact that Romney totally obliterated President Obama in this debate.

I'm sure that the president and first lady are feeling a little blue today, so I figure the least I can do is to send them an e-picture-card as a gift for their anniversary.  As Clint Eastwood would say, I'm sure it will "make their day." 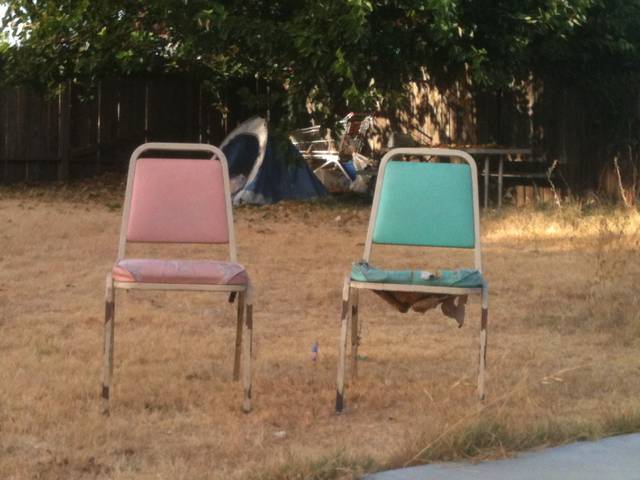 On my way to work (I'm an electrical contractor and did "build" my business) this morning, I had to stop and fuel up my truck.  Putting in exactly $90 netted me exactly 20.004 gallons of gas, which did not "make my day" and caused me to think about Obama's failed energy policy.

My next stop was the fire restoration project that I was almost finished with rough-wiring.  It's located in a neighborhood that has clearly not benefited from Obama's economic policies.  The two chairs (his and hers) survived the fire, and I moved them out to the backyard for the photo op.  I don't think the homeless woman who currently sleeps in the dilapidated tent, as seen in the background, has benefited from any of President Obama's policies either.

Care to guess what gift I'm hoping for on November 6?