Democrats shot themselves in the foot in the second day of their convention. Twice. If a Republican convention had suffered similar fiascoes in the same day, the media would be claiming the convention was verging on chaos.

Today, the Democrats showed us that President Obama can no longer draw the same kind of crowds he did in 2008. Even worse, the party fell all over itself scrambling to undo the damage of exposure of its surreptitious excision of the words "God" and "Jerusalem" from the platform

First, the party announced that Barack Obama would move his acceptance speech to Time-Warner Arena, rather than face thousands of empty seats at Bank of America Stadium. With a straight face, spokespeople have assured us that threat of rain was so severe that there was no alternative. The fact that they were so desperate to get bodies to the stadium that they were handing out tickets in bars, we are expected to discount. As well, we must ignore the meteorologist of the local NBC affiliate who predicted the best weather of the week on Thursday.

But this was just a warm-up for the self immolation that was to come over the party's platform.

Informed people noticed that the Democrats had seriously weakened platform language regarding Israel and had removed the words "God" and "Jerusalem" from the platform. Yesterday, Senator Dick Durbin suffered a humiliating meltdown when asked by Bret Baier why the words were taken out, and the video received much attention online.  The issue festered, as pro-Israel Democrats faced humiliation, and pressure mounted to undo the excision of the two words.

Today, in a supremely awkward event, a resolution to restore the two words (while leaving intact other problems such as removal of language about Hamas) was brought to voice vote. A two-thirds majority being required, a voice vote was called three times, before the chair declare it passed. Most people present, as well as my ears, indicated the two crowd voices were roughly equal, obviosuly not two to one.

So the crowd booed. Yes, they booed passage of a restoration of the word "God." It's right there on digital media. See for yourself:

I expected that the Democratic National Convention would feature one or more deeply embarrassing moments, when Democrats couldn't help themselves from showing the world who they really are. The talk of patriotism and values, scripted for the prime time TV audience, was all a masquerade. The "low information voter" (i.e., the readily deceived) is the target of this Potemkin patriotism. I figured that, gathered together with like minded folks, Democrats would shoot off their mouths, say outrageous things, demonstrate in cringe-inducing fashion, and maybe let slip something really horrifying.

Visual confirmation that the fix was in, as captured by Hannity, and posted in The Right Scoop: 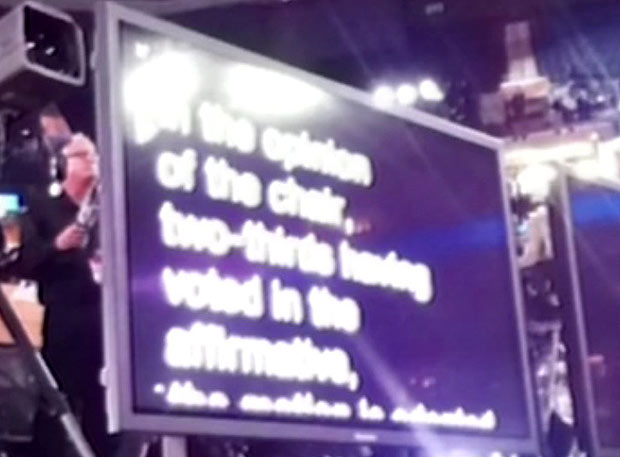 1. Evidence the Dems officially ignore the will of their delegates. This is also known as fixing an election. This incident is immortalized just as the nation is embroiled in controversy over Justice Department effortgs to stop voter ID requirements, and we are regularly assured by the likes of Juan Williams that there is no evidence of a national problem with election fraud.

2. Evidence that the core of the party -- the people who spent a lot of time and money to come to Charlotte -- are not all that happy with "God" or with full throated support of Israel.

Point taken. The MSM will ignore it, but they cannot maintain a cofferdam aroyund this dramatic moment. The reaction of Villaraigosa is a true deer-in-the-headlights moment. That alone ensures viral distribution. It is FUNNY.