Warning: mysqli_free_result() expects parameter 1 to be mysqli_result, bool given in /var/www/html/americanthinker/admin/common/functions/func.general.php on line 126
 In Memoriam: The 31 Heroes of EXTORTION 17 - American Thinker
« NY Times gives platform to notorious self-hating Israeli | Why is Harry Reid riding the mail pony? »
|

In Memoriam: The 31 Heroes of EXTORTION 17

Monday, 06 August 2012, marks one year since the tragic downing  of EXTORTION 17 in Tangi, Afghanistan. The CH-47 "Chinook" was carrying some of this nation's bravest and most capable military personnel, most of whom were a part of their service's special operations community. One of the SEALs on board was my neighbor going back to 1999 when he and his young family first moved in across the street. He was a young Petty Officer 3rd Class with his whole career and his whole life ahead of him.

My retirement ceremony after 24 years of service took place on September 7th 2001 at the base where he served. Just 4 days later, I was at the Veterans Administration Office completing some paperwork when someone burst into the room a group of us were in and said: "We are under attack. Planes have flown into the Twin Towers in New York City and there appear to be others that have been hijacked that are en route to Washington. Please go home for the day and drive carefully." I don't have to tell you how shocked we veterans were. I could not believe what I had just heard, but there it was on the television for all to see. I drove home still unable to fully process what had happened even as I listened to the radio which confirmed everything that was happening. The Pentagon had been hit in addition to the Twin Towers. Another plane had crashed in Pennsylvania -- speculation was that it may have been headed for Washington D.C. as well.

After arriving home and comforting my wife and family, we, like the rest of America, watched the television reports not wanting to believe what we were seeing, hoping that there was some other explanation for it. But there was none. And then my family and I watched as the towers collapsed. That moment is seared into our memories. We will never forget it. Never.

My neighbor was one of the very first special operators to enter Afghanistan after 9-11. He made regular combat tours after that, coming home for anywhere from 6-8 months, and then back out again. And again.  Afghanistan. Iraq.  Afghanistan. Iraq. He advanced quickly to Chief Petty Officer and his young family grew. The absences surely affected them but they were strong through it all. As his oldest boy grew, you could see that he really missed his Dad but he had a younger brother to keep him busy and that helped make the time between combat deployments go by. But SEALs seldom get much time home in between tours as they are always required to train and practice their skills and that means lots of time away from the family even during the "home cycle." They took it all in stride.

He had advanced to Senior Chief Petty Officer. They had moved from our neighborhood to a bigger home as they were planning for their third child. They still visited the neighborhood regularly. After a tour in Afghanistan he had been wounded - but not seriously. It takes a lot to keep a SEAL out of the action. After another home cycle, it was back to Afghanistan not long after the May 2011 operation that had successfully eliminated Osama bin Laden.

I was having coffee in the breakfast nook on Saturday morning, August 6th 2011, when my wife came in from outside. She walked up to me and said: "I just heard that _________ (our neighbor) has been killed in Afghanistan." Again, there was that feeling of disbelief. This couldn't be happening. We turned on the television and I turned on my computer, and sure enough, there it was, right before our eyes. My wife started crying and I stood there in stunned silence trying to comfort her and praying for those killed and for the loved ones left behind.

There is a helpless feeling that can overpower people at times like these. I did not like that feeling and as a veteran myself, I was incensed. I knew I had to do something. I did the only thing I could think of at the time. I made sure my wife was alright and then I said I was going out and that I would be back soon. I went to our base exchange and I purchased 31 flags and I came home and placed them in our side yard along with a tribute to those who had been killed in action on board EXTORTION 17 on 06 August 2011 in Tangi, Afghanistan. I left those flags up for a week. And I determined then and there that I would place those flags in my yard to honor those brave military personnel every year for as long as I am alive. This is a picture of my yard this year. Please join me on Monday in taking a moment out of your day to remember these gallant heroes who made the ultimate sacrifice on our behalf and all of our military personnel who are serving, have served, and especially those who are in harm's way and our wounded warriors. Thank you and God bless America. 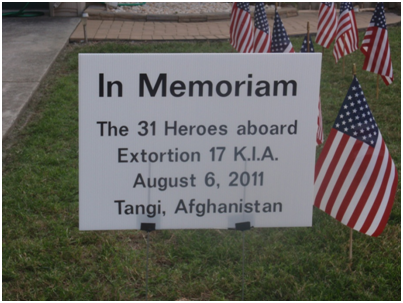 For the full story of EXTORTION 17, please use this link: extortion17.com

For the names of the 31 heroes, please use this link.

Thom Moriarty is a daily reader and contributor to the discussions on American Thinker. He served for 24 years in the military and is now retired and works as a contractor supporting military training.