If you thought that Jesse Jackson Jr. had an easy life, growing up the son of a multimillionaire racism entrepreneur, with a seat in Congress virtually handed to him on a platter because of his father's position in Chicago black politics, think again. It turns out, according to his mommy, that he has had a life of "enormous disappointment." Poor Jesse! Poor mommy, too, for now it turns out, according the Jacqueline Jackson, that she was "tricked" into speaking out publicly about her son's years of disappointment.

The bizarre saga of the political Jackson family just gets more and more outlandish. The Congressman took off work for two weeks with no explanation, later informing his constituents that he was in treatment for "exhaustion," later upgraded to treatment for a "mood disorder" at a rehab facility in Arizona.

Yesterday, in Chicago, mama Jackson addressed a Rainbow/Push gathering of women of her son's disappointments.  Abdon M. Pallasch of the Chicago Sun-Times writes: 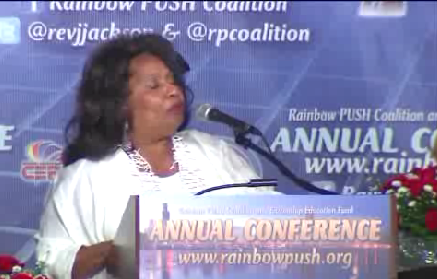 For the record, the Congressman is 47 years old. I guess that still counts as young in a mother's eyes, but to most people it connotes an age in which adulthood should be well established as a behavioral mode.

In the wake of this bizarre excuse for her son's behavior, Mrs. Jackson has claimed that she was "tricked" into speaking out at the luncheon. You can see this report on a WGN TV news segment here. Since the luncheon was organized by her husband's own organization, this would seem to indicate the presence of a saboteur. Oh, what a tangled web.

Meanwhile, according to former Chicago Tribune editor Dennis Byrne, now writing for the website Chicago Now, the grown ups in the Democratic Party are beginning to be concerned that Jackson's seat could even fall to the GOP if he doesn't get his act together:

Tribune columnist John Kass figures senior Democrats are the ones demanding answers because Rep. Jackson's old man, the Rev. Jesse Jackson Sr. is no longer feared, by other Democrats or the media. While I agree with John that Jackson Sr. is far from the power-house of old, I think there's more to it. Namely, the Democratic old boys and girls network are worried about losing a sure house seat.

Unlikely? Sure, but then, you never know....

With Democrats hanging on to retain every seat they have in the GOP-controlled House of Representatives they want to count on sure-things, and with Illinois voters having a record of voting for people they don't know, there's always a chance that one of Jackson's two opponents might pull off an upset.

The seat ought to be safe, but it was redistricted to include more suburban voters, and in a year when Democrats remember the 2010 wipeout, they do have a right to be worried.

One can only hope that the party pros try to lean on Jesse Jr., sparking resistance from the Jackson political machine. There is nothing quite like internecine warfare to weaken a party.