When Rush talks about you on-air

AT contributor John Drew yesterday found out what happens when Rush Limbaugh starts talking about you on air.  John is the author of three landmark articles on his experiences with Barack Obama when both were young Marxists, while Obama was a student at Occidental College.

Even Republicans Rejected Info About Obama's Past

and Tuesday, My White Girlfriend Inspired Obama's Big, Dark Regina in Dreams from My Father

Yesterday, Rush was kind enough to discuss John's article. The transcript, as Rush's website shows it, appears below: 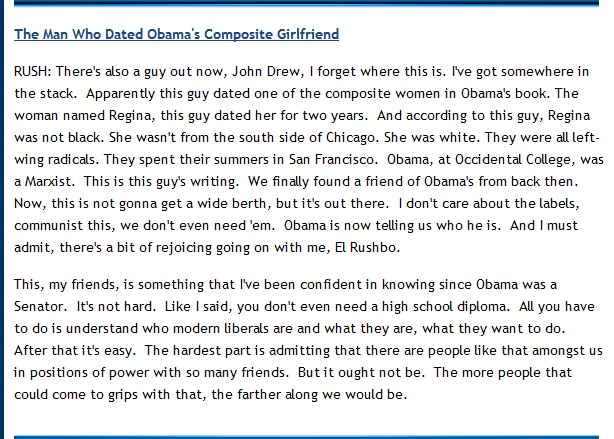 John has written about the experience at his blog, Anonymous Political Scientist:

I was startled today by a large number of phone calls and e-mails alerting me to the fact that my story about the real, white Regina was mentioned on the Rush Limbaugh radio program this morning. Apparently, Rush had read through, or scanned, my recent article on how my white college era girlfriend, Caroline Boss, became the black Regina in Obama's Dreams from My Father.

Of course, what Rush may not have realized is that I have been trying to get my story to his attention for about four years now - ever since I first realized that I had valuable insight into the real Barack Obama. Ironically, I discovered that my take on young Obama's ideological extremism was also a topic of discussion on the Sean Hannity radio program featuring Paul Kengor and his new book, The Communist - Frank Marshall Davis: The Untold Story of Barack Obama's Mentor. The day before, Kengor cited my take on young Obama extremism on The Blaze TV - see my story featured at 12:20.

All in all, I'm particularly grateful to everyone who worked behind the scenes to assist me with writing the article that eventually came to Rush's attention this morning. For a short YouTube video including my take on young Obama's ideological extremism, please click  here.