Warning: mysqli_free_result() expects parameter 1 to be mysqli_result, bool given in /var/www/html/americanthinker/admin/common/functions/func.general.php on line 126
 Obama's Tibet Two-step (updated) - American Thinker
« Obama's selling but Americans aren't buying | You can count on Obama »
|

Tibet is one of those issues where Barack Obama wants to have it both ways. On the one hand, he wants smooth relations with China, which regards Tibet as an integral part of China, and Tibetan religion and culture as impediments to massive immigration by Han Chinese and further assimilation of Tibet. On the other hand, the Dalai Lama has a large following in America, especially among the sort of people who generally like Barack Obama.

Fortunately for him, Barack Obama is a master of the double message, sending contradictory communications to different groups, often deploying visual elements to carry a message in conflict with his words. The most notorious such incident was when he gave the finger to Hillary Clinton during a speech. 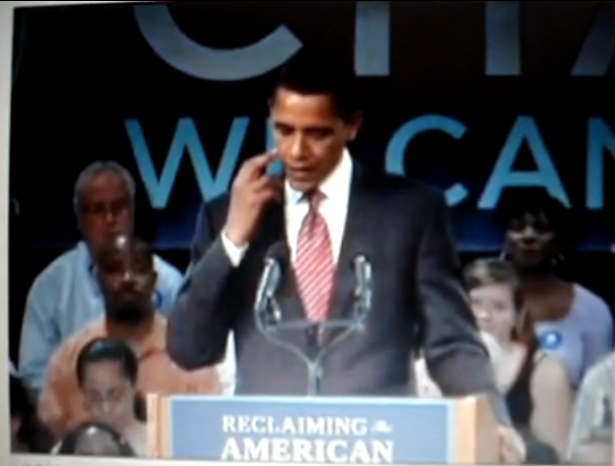 You can catch the entire context in a video here, where you will note the crowd whooping in response to the gesture. On the record, Obama never dissed Hillary with an obscene gesture, of course. But the intended audience got the message, quite unmistakably.

The last visit of the Dalai Lama featured a notorious exit via the garbage, posing an ostensibly holy man next to garbage bags on his way out of the White House. 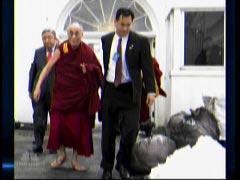 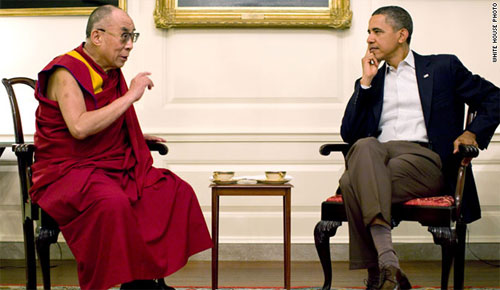 Once again we have an egregious example of the arrogant contempt THE ONE has for traditionally respected figures.

Now, His Holiness, the Dalai Lama, may not be my or your cup of tea, but he is the spiritual leader of the Tibetan people and is generally well-regarded no matter how much of an admitted socialist he is.

But this pose shows it all--rumpled socks (matching what?), exposed leg, no tie, a look of disdain, hardback chairs, and an informal setting away from the usual fireplace before which presidents normally sit when meeting such worthies.

He's right, of course. The Chinese are masters of reading contextual signals, and it would not surprise me if Obama sent an even more direct message to the point that he has to do this for domestic political reasons, but is deliberately signaling  a lack of seriousness.

The country is catching on to what a sly fellow Obama really is, and how naturally he speaks out of both sides of his mouth whenever it is in his interest to do so.

Update. Rick Richman, of Commentary Contentions (and occasionally, AT), writes:

The New York Times Magazine had a long article yesterday on John Kerry, at one point describing his trip to Afghanistan and his meeting with Atta Muhammad Noor, the governor of Balkh province, in Mazar, the capital of the province.

Kerry arrived in congressman-on-the-road mufti - blue blazer, open-necked oxford shirt, khakis, athletic footwear. He took one look at Noor, in a natty blue pinstripe suit, obviously not of domestic design, and blurted out, "I apologize for not wearing a tie." A gentleman, after all, does not wish to give offense by dressing too casually, even in Mazar.

Compare the picture in your post with the picture of Obama with the Dalai Lama last year, which perhaps provides further confirmation of your argument that Obama was trying to make a point for the Chinese, with a meeting on a Saturday (the last day the Dalia Lama was in town after a 10-day visit) in dress barely above golf clothes.