By Bill Schanefelt and Gary Crowder

President Obama's greatest failures have been in foreign policy, and those failures pose immense danger to our nation.

He has destroyed relations with Israel, participated in an illegal and unauthorized war with Libya resulting in Gadhafi's fall and Libya's descent into near-anarchy, led the removal of Mubarak in Egypt leading to destroyed relations with that country, bobbled the Iranian and Syrian uprisings, made a fool of himself in not bombing Syria, allowed for Russia's resurgence in the Middle East, permitted Afghanistan to devolve into chaos, turned victory in Iraq into defeat, allowed North Korea to spit in his face, and made a hash of any effort to block Iran's nuclear program---among many other things. 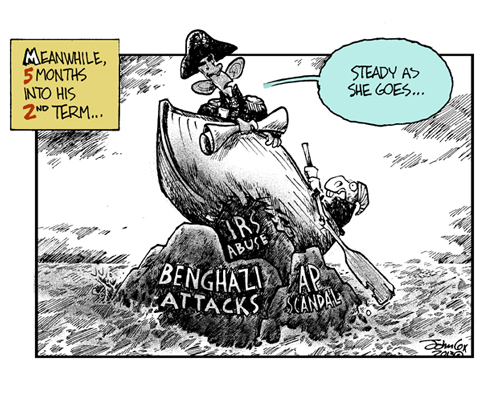 The most serious of the Community Organizer in chief's (COinC's) failures is his allowing China, (by taking advantage of his weakness, irresolution, and incoherence) to create a crisis that potentially could cause a multi-nation war in Asia.  This airspace situation in the East China Sea is of immense significance, because from our very founding as a nation, we have championed, deployed military force to support, and fought for freedom of navigation.

American leaders,for over two hundred years have recognized that, as a commercial nation, freedom of navigation was and would be vital to both our economic success and our economic security.

Our first major overseas military action was to send virtually the entire US Navy to fight the Barbary pirates.  Our first war, the War of 1812, was also fought over trade and the impressment of US merchant mariners.  Our brief period of colonialism was partially as a desire to maintain coaling stations (Hawaii, Guam, and the Philippines) to enable maritime power projection (exemplified by The Great White Fleet.)

More recently, we have expanded this to include freedom of air navigation.  The Berlin Airlift was very much about freedom of air navigation to the encircled city of Berlin.  In the 1980s, the US had several dust ups with Libya over that nation's assertion of exclusive ownership of the Gulf of Sidra (The Line of Death) much to the regret of the Libyan Air Force.

The US has had a number of crises with China over freedom of air and maritime navigation:  The Matsu and Quemoy crisis in the 1950s; Maritime freedom of navigation in the Taiwan Straits; sailing aircraft carriers into the straits in the 1980s and 1990s; and, most recently, the air collision and forced downing of a Navy P-3 on Hainan Island.

The current crisis is unique for several reasons.  First, the East China Sea is not the Gulf of Sidra or the Taiwan Straits: It is a major air and maritime thoroughfare vital to Japanese, and particularly South Korean, economic security.  The precedent of allowing China to assert sovereignty of such a vital section of international airspace would be ominous.

Second, allowing China to do this would embolden further Chinese claims such as asserting exclusive economic and maritime jurisdiction over the East China Sea, the South China Sea and the Spratly Islands.  For the Chinese, the objective is ultimately exclusive air, maritime, and economic rights out to the Second Island Chain, a vast enlargement of China's sovereign control.

Third, the feckless response of the US to foreign crises under Obama does nothing but embolden our adversaries.  The fact that we all but apologized for sending B-52s into the claimed Air Defense Identification Zone ("it was a pre-planned exercise" not a provocation or assertion of air freedom of navigation) is further proof of the raw cowardice of this administration.

The challenge here is not that China will make these assertions.   The challenge is that by not responding, the US will increasingly force allies and neutrals in the region to seek accommodation with the Chinese, further weakening the US position in the region.  Our weakness will also likely lead to South Korea and Japan seeking independent nuclear capability, just as Saudi Arabia will likely do now as a consequence of our submission to Iranian nuclear demands.

All of this will likely lead to a far more dangerous and unstable world.  It will take the US decades to recover the trust of our friends and allies and to again be viewed as a fair international arbitrator.  These are just two of the things that we have deliberately thrown away under Obama's foreign policy.

There are several other broad implications:

First, China's economy cannot sustain itself on its current path. There have been numerous articles on this recently.  These generally discuss the inability of China to maintain sufficiently high growth rates to be able to fulfill the Communist's Party deal of providing economic advancement and security in exchange for retaining political control.

Second, and less talked about, are vast disparities between the numbers of men and women (perhaps as many as 37,000,000 more men than women) and the disastrous economic implications of China's "one child" policy.  (The worldwide demographic sex ratio at birth is about 105 boys for 100 girls, but in some areas of China, that ratio can be as high as 192-to-100 -- an outstanding discussion of this situation may be found here.)  The "one-child" policy will mean that a married couple will have to support four parents who will increasingly live longer.  This is economic and demographic suicide.

Third, the consequences when the economic miracle starts to fail are predictable.  China will become increasingly aggressive in virtually all aspects of foreign affairs.  With the economic resources and excess manpower that it will have, China will be able to create enormous international mischief.  What would the US do, for example, if China stationed military manpower (or more subtly military manpower posing as private security) in the Panama Canal or to protect its oil investments in Africa?  The implications and ramifications of such actions, which will not be opposed by Obama, are unsettling.

Fourth, the Pentagon is a mess.  There is an utter lack of strategic thought.  We should have seen this coming when "climate change" was a principal element of Obama's first National Security Strategy.  More specifically, with the dramatic reductions in defense spending, it is doubtful that the nation's available resources will be sufficient to adequately provide for an ample defense with just a smaller version of what we had a decade ago.

The US is an air and maritime power, yet almost two thirds of all recruits are into the Army and Marine Corps.  We face no ground threat, and our allies (most notably South Korea) can defend themselves with their own ground forces if teamed with US air and maritime forces.

We have also seen the extreme vulnerability of US ground forces when deployed for other than major combat operations.  Yet, the Pentagon is dominated by "land men:" They simply cannot see the world as it is -- a decided decrease in requirements for a large-scale conventional ground force establishment, particularly a 500,000 man Army that can deploy nowhere quickly.

The F-35.  The F-35 is a Cold War relic, yet we are spending enormous amounts of money on a capability for domestic and international political purposes while ignoring the immense military risks.  The F-35 is the 21st century equivalent of the Maginot Line.  The cost of the F-35 program is larger than the next 10 acquisition programs combined.  And, it is simply not that good of a fighter aircraft.  Think about that for a minute...what if this program is not what we need for the decades ahead?

The F-22, F-15E and the F-18E/F/G are the finest combat aircraft in the world.  They can, with continued improvements, serve as the core of the US combat fighter force for 20-30 more years if purchased in sufficient quantities and continually upgraded.

The Next Generation Bomber and Unmanned Combat Air Vehicle (UCAV) will increasingly form the bulk of our offensive combat air power. UCAV (X-45 class) will also have the advantage of being significantly cheaper to acquire (no pilot or life support equipment) and operate (perhaps 75-90% of training sorties could be flown in a simulator.)

Reducing the active duty Army to a force of perhaps a force of 350,000 (combined with a restructured rapid reserve training capability) and canceling the F-35 program in favor of continued production of F-22s, F-15Es, and F-18s (plus building the NGB and the UCAV) would free up hundreds of billions of dollars to truly restructure the US military.

None of this is possible without leadership or strategy, the two characteristics most lacking in Obama's foreign policy and at the Department of Defense.

We are not sanguine about our future, for we face this peril, and others, not led by an experienced executive as the Commander-in-Chief of our military and nation but by a neophyte ideologue as the Community-Organizer-in-Chief of a band of rag-tag, sycophantic acolytes:

A competent executive would have made examples of a few people long ago as a message to the rest to improve their work.  The problem is that we don't have competent executives in this administration, starting at the top....[I] t's notable that after the months-long series of blunders and scandals, we haven't seen...a White House shake-up.

Of one thing we are certain: President Obama is and will always be known as the political Comet ISON of all time (Scott Mayer agrees.)

God save these United States and all who live therein.

Bill Schanefelt is retired, his profile as Steamboatman, Field Director, Skipper, and Hotelier may be found on LinkedIn, and he may be argued with at bilschan@hotmail.com. Gary Crowder is a retired USAF Colonel, a War College graduate, and he has commanded or served in a variety of high-level AF and DoD organizations.