Warning: mysqli_free_result() expects parameter 1 to be mysqli_result, bool given in /var/www/html/americanthinker/admin/common/functions/func.general.php on line 126
 How Generous Can Justice Afford To Be? - American Thinker
|

How Generous Can Justice Afford To Be?

How is justice achieved? What path should Christians follow in a world of seemingly endless needs? How do we best serve God in relation to the poor? Generous Justice by Tim Keller tries to provide a theological and philosophical framework which will allow the reader to answer those questions. However, his treatment of the issues is, at best, uneven, and might draw the undiscerning reader unwittingly towards leftist ideology.

He sees himself above the divide that has the liberal-left against the religious right. He believes there is a correct "balance" between these two. Biblical economics, he believes, defines the correct concepts and principles for enacting this balance. But it is at the very point where he tries to define Biblical economics that he seems weakest. For example, he compares money to manna. Yet, he really does not develop that idea in a meaningful way. Neither the right nor the left see money that way. Manna is miraculous because it would be as if actual, edible, nutritious food of some kind would miraculously drop out of the sky without our having to go to the market. However, money is not like manna; it is a mode of exchange. Also, he says we have to look for economic parallels to the jubilee years of the Hebrew Scriptures in order to enact a truly ethical system. Jubilee years allowed for the forgiveness of debt. There is no acknowledgment by Keller that our bankruptcy laws are the parallel to the jubilee years. He also would like to see a parallel to the gleaning laws of ancient times enacted in the USA. However, those who claim to speak for the poor usually fault America for just leaving "crumbs" for the poor (for gleaning) instead of allowing a true upward mobility or redistribution of wealth. In short, they claim that poverty is a form of gleaning already, and that a "gleaning" approach would not be a corrective as Keller claims. 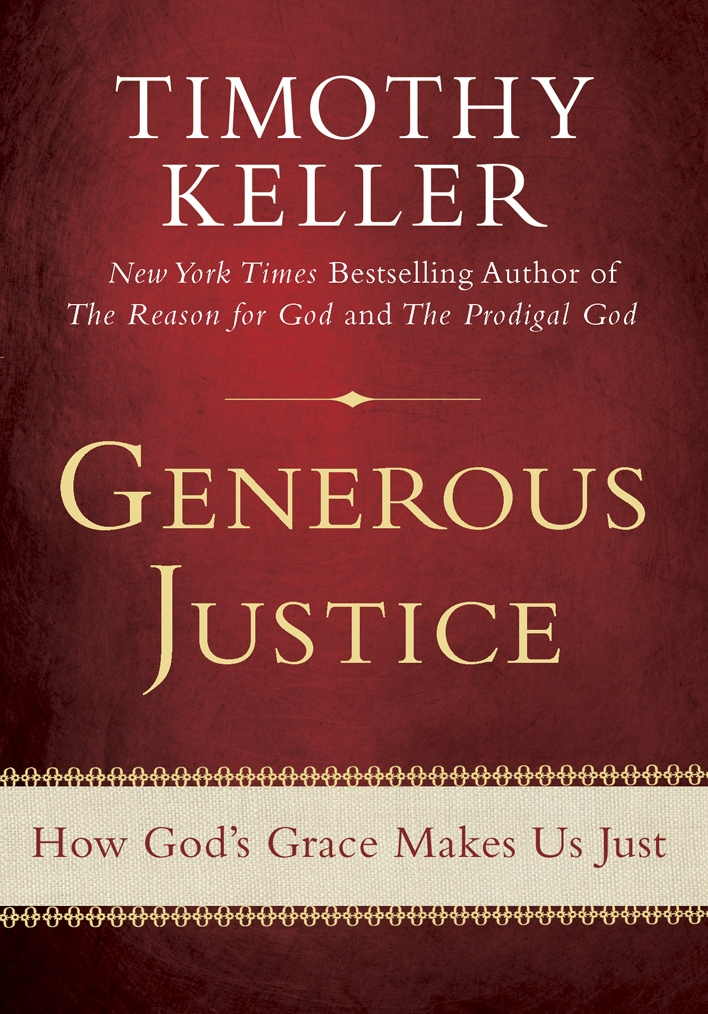 He seems to say that Christians and society in general are too judgmental when giving money or assistance to the poor, implying that there are too many conditions on that giving. Is he correct? If the person buys drugs instead of food for the kids, the cash stream cannot go on. Other intervention is needed. If a person has housing provided and is destroying the habitat for all others living in the building, more aggressive supervision is needed. A more "unconditional" perspective would make no sense.

Although Keller speaks a lot about our patterns of giving, he seems insufficiently aware of economics. There is no mention of the Austrian school of economics. Ludwig von Mises or Freidrich Hayek are never mentioned. Of course, giving charity to our fellowman does not require a knowledge of economics, but for Pastor Keller "doing justice" is not the same as "giving charity." If giving to the poor is not personal as with charity, then economics at the macro level must come into our decisions as individuals and as a society. Wishing it were not so will not make economic realities disappear.

Keller distances himself from the social gospel of Walter Rauschenbusch who, the reader may recall, distanced himself from theological orthodoxy at the turn of the 20th century. Rauschenbusch rejected the substitutionary, atoning death of Jesus, but instead saw Christ as an example of total unselfishness. Yet, Keller's version of "social justice" is distorted away from orthodoxy as well, albeit not by rejecting Christ's atoning death on the Cross, but by diluting the classic confessions of the Protestant faith. For example, in the many "confessions" of the Reformation, "doing justice" is not given the front and center treatment that Dr. Keller believes it deserves. The Baptist Confession of Faith of 1689 altogether omits the topic of "justice" or "social justice." The Baptist Confession was adopted from the Westminster Confession of 1646 which also does not have a "social justice" section. Likewise we do not find this emphasis in the Savoy Confession of the Congregationalists, and the 39 Articles of the Anglicans (yes, "good works" are mentioned, but this is a more broadly conceived category than generosity to the poor). Why did they all leave out the emphasis that he considers to be so essential?

Twice in the book Dr. Keller mentions redlining as an oppressive practice in regard to the poor. They cannot get mortgage loans for example for homes in poor neighborhoods. Well, in the 1990s we had the anti-redlining Community Reinvestment Act to force banks to make loans to people who did not have a 20% downpayment, and did not have the cash flow to pay off a legitimate mortgage. What have we found? Foreclosures of homes have never been as high as they have since 2007. Home prices have been devalued to a point that no one could ever have expected or imagined in the 1990s or earlier. Redlining is portrayed as discriminatory, but in fact, it is simply good business. "Redlining" is a pejorative term coined for political purposes, and opposition to it is not an expression of justice, but simply a misunderstanding of economics.

By separating charity from justice, he places himself squarely in the liberation theology camp. This bent of thinking spells the death knell for America as a thriving, caring society as these actions of "justice" will create a permanent underclass of millions of dependent persons, where they remain perfectly content to be poor, and the rest of society remains perfectly content to support their lifestyles. This type of social philosophy would rightly be called enabling, not commitment to justice. We don't want to let people starve or die for lack of care. But at the same time, a godly wisdom must be enacted if we are to be responsible citizens. Although the word responsibility is sometimes overused, or used as a ruse to cover selfish motives, it must be at the forefront of our thinking in all giving, both public and private.

We have to help the poor and there is a lot in this book that will help us to do so. At the same time, the political conservatives who are Christian have a better grasp of real world needs and issues and implementation than he gives them credit for having. While many Christian religionists are complacent in their middle-class security, a greater number are not. Never has there been a more giving people to the poor than the American, church-going middle and upper classes. And, what's more, they give away their own money. But the American left is more intent upon giving away other peoples' moneys and endangering future generations with crushing debt. Are they borrowing and taxing for the sake of the poor?Of course, they would like to give that impression to play on the guilt of the citizens. But they are in reality doing so to accrue more and more power and control and to assure the dominance of the political class, not the people, for generations to come.

Mr. Ludwig is pastor of Bible Christian Church and a Harvard University Master Teacher. He has recently published Memoir of a Jewish American Christian, and has been working to build bridges between races from the beginnings of the civil rights movement until the present.