Warning: mysqli_free_result() expects parameter 1 to be mysqli_result, bool given in /var/www/html/americanthinker/admin/common/functions/func.general.php on line 126
 The Keystone XL Pipeline and the Truth - American Thinker
|

The Keystone XL Pipeline and the Truth

The proposed construction of the Keystone XL pipeline has long been polarized on a number of issues. Hysteria abounds, with junk science everywhere we look -- driven in no small measure by the desire to shut down development of northern Alberta's oil sands via constraining Canadian oil export markets, as well as some apparent anti-Americanism.

In early 2012, there was a Huffington Post online debate over the Keystone XL pros and cons between environmental activist Bill McKibben and Canadian conservative and media personality Ezra Levant. McKibben -- obviously in the 'con' position -- made some ridiculously incorrect statements:

"[l]et's start in Alberta and move our way down the continent, around the globe, and out into the atmosphere ... Because this low-grade oil won't flow out of the ground, oil companies have to mine it, creating an enormous scar. Though they've only gotten three percent of the oil so far, the toxic tailing ponds are already the largest on earth, holding more liquid than the reservoir behind China's Three Gorges Dam."

By comparison, the reservoir behind China's Three Gorges Dam contains 39.3 cubic kilometers of water, or 39.3 billion cubic meters, in comparison to the <1 billion cubic meters of tailings that appear to be present at the northern Alberta oil sands development. Perhaps McKibben needs to better explain how he arrived at his interesting conclusion? The data I have does not indicate the tailings ponds hold "more liquid than the reservoir behind China's Three Gorges Dam," rather it suggests they are less than 2% of the Three Gorges Dam volume.

Of course, there is also some anti-American absurdity. Vivian Krause -- a Canadian independent blogger working to expose the funding sources behind various environmental groups -- came up with the following quackery in her attempts to make the link that "[c]harities are helping the U.S. keep Canada over a barrel." The point of Krause's article appears to be that some American charities that are active in Canada are selectively opposing pipelines that would help carry Canada's oil production to non-American export markets. Krause makes the following statement:

"Tides USA is a co-funder of the Rockefeller Brothers Tar Sands Campaign, whose first goal is to stop or limit pipelines and refinery expansions. But of all the hundreds of pipelines in North America, the only pipelines that the Rockefellers single out in their multi-million-dollar campaign are the Mackenzie pipeline and the Enbridge Northern Gateway -- pipelines that would export Canadian energy. The Rockefeller Brothers also seek to ban oil tanker traffic, but again, they only oppose oil tankers on the strategic coast of British Columbia and in the far north -- those export-bound to Asia."

On her website, Krause provides a copy of a presentation apparently given by the Rockefeller Brothers Foundation (RBF) from 2008 entitled "The Tar Sands Campaign." In this document, it appears the RBF specifically mentions the Keystone XL pipeline (which would ship Canadian oil to the U.S.), the Enbridge Northern Gateway pipeline (which would ship Canadian oil primarily overseas to Asia, although the pipeline would allow exports by sea to the U.S. if desired/economical), and the Mackenzie Valley pipeline (which would ship Canadian natural gas to the U.S., as well as into Canadian markets), and on page 40 of the RBF presentation, it appears that "Strategic Track 1" is to stop/limit pipelines and refinery expansions that would either bring Canadian oil from the "tar sands" into the U.S. and/or provide opportunities to refine Canadian "tar sands" oil in the U.S. (screen capture of this RBF slide shown below). 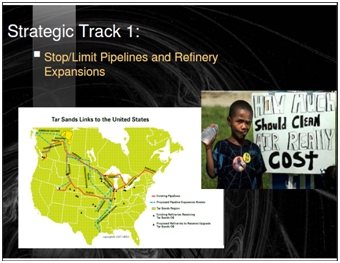 On the website of the Rockefeller Family Fund (a closely related fund with the RBF), they proudly proclaim support for opposition to the Keystone XL pipeline:

"In a decisive action that kills the proposed 1700-mile TransCanada pipeline for now, President Obama has sided with the voices of climate advocates led by RFF grantee, 350.org and its leader, Bill McKibben. Against great political odds and the deep-pocketed backing of the oil industry, the decision marks a spectacular victory for climate progress and a new energy economy."

The Heritage Foundation makes the following statement about the 2008 RBF presentation regarding RBF's opposition to Keystone XL:

"Details of a large non-profit's plans to combat the Keystone XL pipeline have surfaced, and offer some insight into the strategies and tactics of groups looking to combat the use of fossil fuels. Canadian news channel Sun News uncovered of a [sic] PowerPoint presentation from the Rockefeller Brothers Fund detailing its work with other groups to derail the Keystone XL pipeline and other similar projects it deemed parts of 'a globally significant threat.' The presentation, written in 2008, describes the allocation of $7 million to environmental non-profits for tactics that include the use of the legislative and legal systems to delay or derail energy production in the United States and Canada, and to 'raise the costs' of energy in both nations."

"A Powerpoint presentation obtained by The Daily Caller shows that during a July 2008 meeting, the $789 million Rockefeller Brothers Fund proposed to coordinate and fund a dozen environmental and anti-corporate activist groups' efforts to scuttle pipelines carrying tar sands oil from Canada to the United States. The most recent incarnation of that pipeline plan, the Keystone XL project, was the subject of intense public controversy until the Obama administration rejected it in January."

So, we appear left with the basic question -- what is Krause talking about? Based on the information available, it appears that the RBF opposes Canadian oil exports to the U.S. as much as it opposes Canadian oil exports to China. So how is this part of some master plan to "let the U.S. keep Canada over a barrel"? Unless there is information we are collectively missing, it sounds like a misguided theory.

Keystone XL -- and, by extension, the public -- is caught in the cross-hairs of competing groups with various agendas. Some anti-American currents run strong in Canada, and these activists would prefer that Canada separate its economy from that of its southern neighbor. Asian interests -- notably China -- would like Canada to export its oil to them rather than the USA, making for likely opponents to Keystone XL. Middle Eastern and other oil-producing states would like Canada's oil exports limited in order to reduce global competition. Various environmentalists oppose further fossil fuels development. In the media battlespace over this pipeline, it has become almost impossible for the public to get to the truth.