Warning: mysqli_free_result() expects parameter 1 to be mysqli_result, bool given in /var/www/html/americanthinker/admin/common/functions/func.general.php on line 126
 Niquabs vs. the West - American Thinker
|

The BBC's Newsbeat website has just published a piece on a 'damning survey' (as it's usually put) of young people's attitudes to Muslims in the UK. The results were rather negative. (The survey itself was carried out in June, 2013. This Newsbeat report -- written by Muslim reporter Sima Kotecha -- was published on the 25th of September.)

Perhaps because of that, the BBC itself saw that it was necessary to portray Muslims in a positive light in order to counteract such negativity. One way in which it did so -- and it's a way which others have replicated on many occasions -- was by using the now compulsory image of a Muslim woman (usually in a hijab) flying the Union Jack. (They use the Stars & Stripes in the United States.)

Only this image went one step further. Instead of an image of a Muslim woman with a hijab (the Islamic garment which covers only the hair) waving the Union Jack, this image was one of a woman in a niqab doing the same thing! Usually these photos are of brown-skinned models -- probably not Muslims -- with the Union Jack or Stars & Stripes. This time it looked like the genuine article -- but you never know. 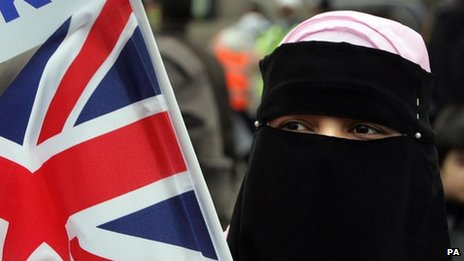 Do these photographers and journalists think the public is stupid? This particular woman has probably never touched a Union Jack before let alone waved one -- she certainly looked ill at ease. I'm even prepared to concede that on a few occasions Muslim activists have donned the Union Jack without being told to do so by the BBC or by journalists/photographers. But that too would be for publicity purposes. This is not cynicism on my part. It's simply a result of my knowledge of what the niqab truly represents.

People aren't fools. Fair enough, there is a very small chance that a hijab-wearing Muslim could be a genuine British or American patriot -- but a woman in a niqab or burka? Not a chance! Simply ask yourself why is she wearing a niqab. The answer is that's she's doing so for reasons that are profoundly at odds with all the versions of patriotism that I know; but especially the patriotism of a 'secular state' like the United Kingdom.

The Niqab and Islamist Politics

The niqab (or 'veil') and burkha, and to a lesser extent the hijab, are utterly symbolic items of dress. Despite what people think, even in the Arab world -- as well as in Iran -- the burkha and niqab didn't start being widely (if at all) worn until the late 1970s. In the UK itself, it is a very recent phenomenon. The burkha and niqab only began to be worn in the late 1990s or even in the 2000s (in many cases later than that).

The niqab is a symbol of Islamism/fundamentalist Islam and of self-conscious difference. It is a symbol of the Muslim woman's complete separation from non-Muslim society. It is a political and religious statement.

In Islam, politics and religion are already fused. It can even be argued that all believing and practicing Muslims are Islamists in the sense that Islam itself -- not Islamism -- happily fuses religion and politics (even according to most -- or all -- Muslims). However, in the case of those women who wear the niqab, they most certainly fuse Islam with politics -- with totalitarian politics. Thus the idea of an Islamist willingly waving the Union Jack or Stars & Stripes becomes even more ridiculous. A niqab-clad woman flying the Union Jack is about as ridiculous and deceitful as a black person wearing the whites robes of the Ku Klux Klan. No one buys it. The Muslim woman in the photo doesn't buy it. The photographer doesn't buy it. (Indeed he concocted it.) The writer of the BBC report doesn't buy it. So why bother?

In terms of the blatantly political nature of the niqab, it's interesting to recall that Muslim women began to wear the niqab -- mainly under Hamas direction -- in the West Bank during the 2001 intifada. In addition, all the female candidates in the elections which brought Hamas to power -- in 2006 -- wore niqabs. As one would expect, the longer Hamas's harsh rule has continued, the more women have worn the niqab.

The strange thing, at least to some Western non-Muslims, is that the niqab is actually banned in some Muslim countries because they too recognize the political implications of allowing people to wear it. They realize that it is a statement of Islamist intent. Consequently, the niqab is banned in Azerbaijan, Tunisia, and Turkey; though only when the Muslim woman is working as a public servant. In Syria, 1, 200 niqab-wearing teachers were transferred to admin duties in the summer of 2010. Nonetheless, possibly under Islamist and Sunni pressure, this position was apparently reversed when it was reported, in April 2011, that teachers would again be allowed to wear the niqab again. Before that, though, in the summer of 2010, students wearing the niqab were stopped from enrolling on university courses.

And just as non-Islamist Muslim states ban the niqab, so Islamist and Wahhabi states legally enforce its wearing. This again stresses the political nature of the niqab. For example, in Saudi Arabia women are required to wear the niqab; or at least they are in the main cities (e.g., Mecca, Medina, and Taif). In the case of Iran, the Shah banned all Islamic dress or at least all head-coverings. The clerics, of course, were very much against this because they deemed it obligatory, in Islam, that women covered their hair and faces. Needless to say, after the 'Islamic Revolution' of 1979, the niqab came back into fashion.

Differences Between the Niqab & the Burkha

Muslims will make the pedantic point that non-Muslims often mean niqab when they say 'burkha'. Basically, there is a very small difference between the two. The burkha is literally like a prison in which the Muslim woman is caged. You cannot even see her eyes. With the niqab, on the other hand, Muslim men are kind enough to allow Muslim women to show their eyes ('the niqab liberates Muslim women'). In point of fact, however, one translation of the Arabic niqāb is actually 'mask'. 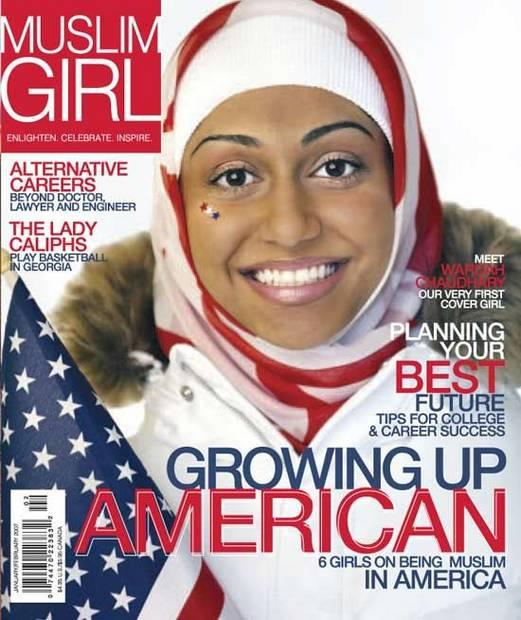 Another way of distinguishing the niqab from the burkha is to say that Western Islamists tend to wear the niqab, whereas Muslims in tribal countries, such as Afghanistan, wear the burkha. The other thing is that the burkha is said, by Muslims, to cover the entire body but this is not true of the niqab. Yet those Muslims in the West who wear the niqab also wear a full Islamic uniform which similarly covers the entire body. Consequently it's largely irrelevant that the whole uniform itself is not classed as a niqab (only the head covering).

Although I said that the wearing of the niqab is a new phenomenon in the West, and even in most of the Muslim world, there are still lots of Koranic and Islamic backing for the covering of the hair and face; if not specifically for wearing the niqab or burkha.

In the Hanafi (Sunni) and Hanbali (Sunni) schools is is obligatory (wajib) for a woman to cover her face and indeed her entire body. The Salafis (Sunni), as you'd expect, also believe that a women should cover her entire body other than her eyes and hands.

The Sunni Muslim position is fully understandable when you consider various Koranic and Islamic texts. For example, the wives of Muhammad covered themselves when in the presence of other men. Muslims also cite this passage in support of the hijab, burkha, and niqab:

"O Prophet! Tell your wives and your daughters, and the believing women, to draw their cloaks (veils) over their bodies. That will be better that they should be known (as respectable woman) so as not to be annoyed."

Some Muslims, however, claim that this doesn't say anything about covering the face itself. Nonetheless, there are tens of passages in the hadith which which say precisely that. For example, in Bukhari 6:60:282, Sunnan Abu Dawud, it reads:

"Narrated Aisha: The woman is to bring down her Jilbāb from over her head and [then place it] upon her face."

And there's also this passage:

"Narrated Aisha:... each of us would lower her Jilbāb from her head over her face, and when they passed by we would uncover our faces." (1:1833)

"We are used to cover our faces from the men, and cut our hair before that in Ihrām [for Hajj]."

In a sense, rather than Muslims not wanting the niqab or burkha to be banned, this is precisely what they do want. Or, more correctly, through the wearing of these clothes, and the resulting political uproar, Muslims -- or at least Islamists -- can both assert their identity and challenge the 'secular state'. Take just one of many examples of this. Sultaana Freeman, in 2003, sued the state of Florida for the right to wear a niqab for her driver's license photo. She lost the case. Nonetheless, she gained the concession of making sure that the photographer was female. That was just one more victory for Islamism and possibly -- depending on how you view the difference -- for Islam itself.

Finally, even if the banning of niqab and burkha does raise issues of freedom and personal rights, we still mustn't forget the utterly political nature of these garments. In fact, they are the exact equivalents of swastika armbands or a hammer-&-sickle badges