Warning: mysqli_free_result() expects parameter 1 to be mysqli_result, bool given in /var/www/html/americanthinker/admin/common/functions/func.general.php on line 126
 Reagan vs. Obama: It's not even close - American Thinker
|

Reagan vs. Obama: It's not even close

As evidenced by the troubled thoughts of delusional liberals on the American Thinker site, many on the left seem to be confused about history -- and particularly the Reagan years.  A comparison between Reagan and Obama seems in order.

We'll start with an electoral analysis. Reagan won the 1980 election by 10 percentage points in the popular vote over an incumbent president, also carrying 44 states and taking 91% of the electoral college.  In 1984, Reagan was re-elected with an over 18% margin in the popular vote, carrying 49 states (and losing only Minnesota, by 3,761 votes [0.18%], to prevent a complete 50-state sweep) and taking 98% of the electoral college.  These represent the largest back-to-back presidential election wins in American history, attesting to the fact that American voters like true conservatism -- not RINO-oriented compassionate conservatism mush, nor liberalism.

By comparison, Obama won the 2008 election against a non-incumbent ticket by only 7% in the popular vote, carried only 28 states, and took only 68% of the electoral college.  In 2012, he was re-elected by a margin of less than 4% of the popular vote (a decline from 2008, in contrast to Reagan's large popular vote increase between 1980 and 1984), carried only 26 states (another decline vs. Reagan's increase), and took only 62% of the electoral college (another decline compared to Reagan's second-term increase).

Moving on to the economy, Obama continues to get trounced.  In the figures below, the year before each president took office is defined as Year 0.  The value of each indicator is normalized to 100 at Year 0 to facilitate intercomparisons.  Data includes per-capita GDP in constant 2005 US dollars, unemployment rate, the American share of global GDP on an purchasing power parity (PPP) basis, civilian labor force participation rate, civilian employment-population ratio, average duration of unemployment, per-capita real personal income in 2009 chained dollars, and per-capita real personal disposable income in 2009 chained dollars. 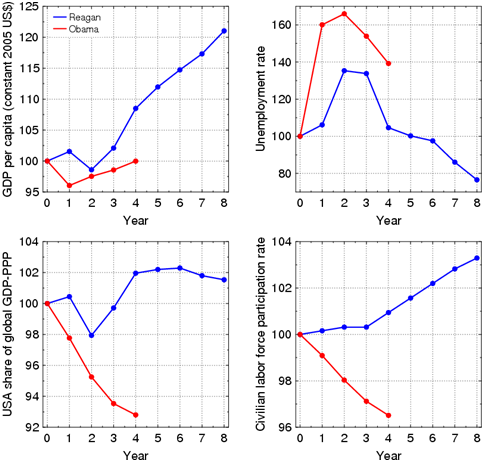 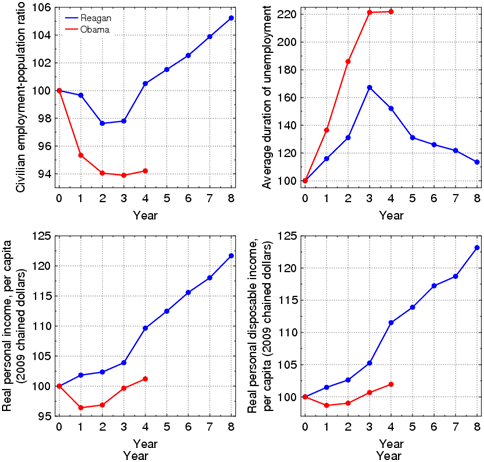 On each and every key indicator, Reagan outperformed Obama by a wide margin.

Continuing, the following figures show the change in general government gross and net debt during the Reagan and Obama periods.

And, yes, Obama owns 2009.  If the liberals get to blame 2009 on Bush 43 and take this out of any comparisons, then Reagan supporters can blame the 1981-82 recession on the structural faults in the economy left over from the Carter years -- and this tit-for-tat will not work out any better for Obama supporters.  No matter how you carve it up, Reagan massively outperformed Obama on the economy.

On top of all this, Reagan won the Cold War: a far greater -- and more difficult -- national achievement than catching Osama bin Laden (which seems to be Obama's greatest military success).  Even some Hollywood films contributed to promoting Reagan-esque anti-communist ideals, such as Red Dawn, Rocky IV, Rambo 2 and 3, and Top Gun.  A far cry from today's anti-American Hollywood propaganda and globalist agendas.

Overall, America was a different nation under Reagan.  It was a strong, confident, and successful nation that America hadn't known before Reagan -- since at least back to the start of the culture wars in the early 1960s -- and which it hasn't known since Reagan.  The Obama years will be remembered as a wasteland of bad decisions, corruption and incompetence, and missed opportunities.  To compare the Reagan and Obama years is informative: it reminds us of what we once had, what we could have again, and how bad it is today.