Warning: mysqli_free_result() expects parameter 1 to be mysqli_result, bool given in /var/www/html/americanthinker/admin/common/functions/func.general.php on line 126
 'Dance with the Girl Ya Brung' - American Thinker
|

'Dance with the Girl Ya Brung'

Within the past few weeks, there have been barrels of ink and trillions of pixels consumed by both the political left and right decrying the murderous violence in Egypt since the ouster of the Morsi regime by the Egyptian military. News reports have indicated that multiple hundreds, if not thousands, have been killed on both sides of the Egyptian political divide.

And while this slaughter is happening, just what has the "leader of the free world", our president, Barack Hussein Obama, been doing to address this catastrophe? Well, the president, who has been touted as being a truly "pragmatic" leader has involved himself... pragmatically. He's been playing golf while on vacation.

Now before my brothers and sisters on the left start rattling on about racism, or that I'm really an unredeemed rodeo clown, what I mean by that is that Obama has done exactly the right thing. It may be the only thing that many consider he's ever done correctly. And by playing golf, he was being perfectly pragmatic.

Pragmatism is defined as:

The president's inaction is dictated by the pragmatic realization that there is absolutely nothing that he can do to affect the situation, other than make it worse.

He could, of course, make another teleprompter speech comprised of countless vapid platitudes. He does that well, to be sure, but it would have exactly no positive impact on the violence in Cairo or elsewhere in Egypt. It might even increase the disdain in Egypt for the United States if they were subjected to another unenforceable lecture from America's First-Empty-Suit. 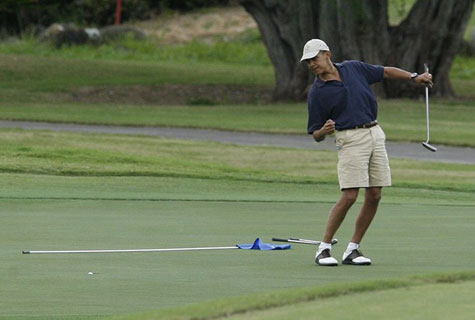 He could cut off the one-billion dollars in foreign (read: military) aid to Egypt. That would do nothing to reduce the violence, and considering that the Saudis, the UAE, and others are upping the foreign aid ante to a cumulative $12 billion, the U.S. aid package will no longer be considered by the military establishment in Egypt as critical. Without such aid being considered critical, it offers Obama absolutely no leverage in "nudging" (to use Cass Sunstein's infamous phrase) the Egyptians to hold down the casualties during the various protests that have sprung up all over their country.

Obama got into this situation of being completely at the mercy of events over which he has absolutely no control thanks in large part by his own predilections toward those Muslims with totalitarianism in their make-up. Think back to the Iranian "Green Revolution" of 2009 when ordinary Iranians flooded the streets of Teheran and pleaded with Obama for help in ousting the radical clerics that dominated Iran.

In that instance, Obama's silence was deafening. He tacitly supported the Sharia-based totalitarian regime against the legitimate aspirations of the ordinary Iranian citizen.

The Obama foreign policy establishment of Hillary Clinton, Susan Rice, and Samantha Powers favored (and let it be known in Egypt that they favored) the Muslim Brotherhood. It is likely that in addition to input from these three foreign policy wonks, there was input from Hillary's close personal friend Huma Abadin, who herself has close family ties within the Muslim Brotherhood, but of course there was no conflict of interest in that advice.

So by listening to these advisors, Obama has painted himself into a corner. He tacitly supported the Morsi regime and when that started to fall apart because of its Sharia totalitarianism, he had no place to hide. The anti-Morsi protesters see him as an ally of their enemy, and so they won't trust him. The Brotherhood sees him as a turncoat, and they won't trust him either. The military has seen how he has treated his own military, and with the threatened aid cutoff, they don't have a surplus of trust for Obama.

So Obama has fallen back on platitudes and generalizations as he is wont to do, which convey nothing concrete and allow the listener to experience some sort of verbal Rorschach test that allows the listener to paint whatever picture they prefer based on the president's verbal virtuosity.

The only specific demand that Obama and Secretary of State John Kerry seem to be adamant about is that the Muslim Brotherhood should be part of a new, inclusive government in Egypt. This must cause a great deal of laughter in Cairo among those who track American politics, since Obama is the least inclusive president we've had in quite a while. For Barack Obama, "reaching across the aisle" is something the other party is supposed to do. Don't dare ask him to do it himself. After all, as he so eloquently put it: "I won."

Further, the fact that Senators John McCain and Lindsey Graham agree with the president that cutting off any further aid to the Egyptian military is just a great idea is just another indicator that there will be even more trouble ahead. Without American aid, the Egyptian military, which is currently the only group providing even a modicum of stability in the country, would find itself forced to find a new supplier of weapons. Perhaps Russia or China will step into the vacuum and provide for their needs. In a year or so, perhaps two, when the military has restored order in the country, broken the back of the Muslim Brotherhood, and Egypt is ready to resume its role as a key player in the region, do Obama-Kerry-Powers-Rice-McCain-Graham honestly think that they can then just waltz back in with a couple of billion in new aid and ask the new Egyptian government to toss out the Russians or the Chinese?

It would appear that the Washington foreign-policy elites are clearly delusional about the rise of democracy in any nation. Exposing a clear lack of historical perspective, they ignore any history prior to July 4, 1776 and act as if a group of guys got together for a barbeque and while waiting for the coals to heat up, cobbled together the Declaration of Independence and the Constitution, and then everything went forward smoothly. Yeah. Sure it did.

As I pointed out on these pages 2½ years ago, democracy is not inherent in human DNA. It is not instinctive. It is not simple. It is not easy. It took Americans over one hundred and fifty years to get to the Declaration of Independence. Our first constitution, the Articles of Confederation, worked about as well as the Volt automobile of today. Our next try, the U.S. Constitution, has worked out fairly well for the past 225 years, but it still needed twenty-seven amendments, and there are always rumblings that it still isn't quite right. So we have spent over 375 years trying to get democracy and a government of the people established in this country, and if we look at it objectively, it's still not perfect.

So why should anyone expect any other nation, particularly one that has been ruled by strongmen for millennia, to get it right in about twelve months? The oldest democratic republic on the planet (that would be us) is still trying to get it right after almost four hundred years.

Given that, we should accept that although Egypt is not a perfect example of a liberal-democratic society, it has taken its first baby steps in that direction, and accept it with all its flaws and weaknesses, rather than pick up our marbles and go home. As John Madden used to say when he found himself in an unfavorable field position, "Ya gotta dance with the girl ya brung."

So now it's time for us to dance with, and support, Egypt, while trying to lead the dance steps that are needed.

Jim Yardley is a retired financial controller, a two-tour Vietnam veteran and writes frequently about political idiocy, business and economic idiocy and American cultural idiocy. Jim also blogs at http://jimyardley.wordpress.com/, and can be contacted directly at james.v.yardley@gmail.com