Warning: mysqli_free_result() expects parameter 1 to be mysqli_result, bool given in /var/www/html/americanthinker/admin/common/functions/func.general.php on line 126
 American Education: a Lesson in Incoherence - American Thinker
|

American Education: a Lesson in Incoherence

In a recent American Thinker article, Thomas Lifson made the astute observation that the American higher education system has "got[ten] fat, lazy, inward-focused, and expensive during its decades of monopoly on certification of higher end new labor force entrants." No truer words have been spoken on the state of the post-secondary establishment in the USA and other western democracies.

The liberal dominated higher education system will, of course, attempt to deny these charges. But the data is against them.

The OECD released a 2012 report looking at the educational systems of its member states. The results are not promising for tertiary education in the USA.

The USA has a below-average employment rate for tertiary educated 25-64 year olds, ranked 10th worst among 35 countries, with the corresponding unemployment rate in this same group well above the OECD average. America also has a below average proportion of full-time earners among 25-64 year-old tertiary-educated individuals with earnings from employment.

World Bank data also shows that the percentage of total unemployment comprised of those with tertiary education is extremely high in the USA. Using the latest data from 2008, about 47% of all those unemployed in America are tertiary educated. The USA has long had a high value in this metric, never falling below 39% since the start of the data record in 1994. By comparison, the OECD average has ranged between 19% (1994) and 25% (2008).

Worse yet, the "[p]rivate net present value and internal rate of return for an individual obtaining tertiary education as part of initial education" is only 8.8%, below the OECD average of 11.4% and the EU21 average of 10.8%, and ranked 18th among 28 nations.

The system does not come cheap. The following figure from this OECD report shows per student annual expenditures for all services in the tertiary education system by country:

American system is the most expensive in the world ($29,201 per student), outspending its nearest rival (Switzerland at $21,577) by more than 35%. It also does a poor job of converting the public investment in tertiary education into national wealth. The following figure (also from this OECD report) shows per student expenditures in tertiary education against per capita GDP for OECD members, along with a best-fit regression line. 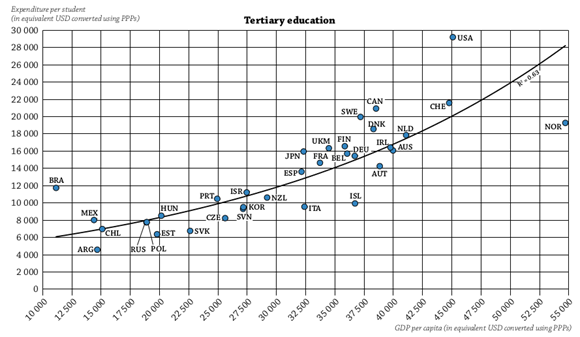 Note the USA's position -- more than $9,000 above the regression line, suggesting the USA is spending about $9,000 too much per student on higher education when we consider the corresponding national wealth. Of course, the sole purpose of higher education is not wealth generation, but it is a major goal of the system. It is in the long-term best interests of the tertiary education system to become efficient at creating wealth for the broader society.

As Lifson accurately notes, there is a "crisis" in American higher education, and it's likely to get much worse. The system is in many ways incompetent, and also corrupt, politically biased, and economically inefficient. Hopefully conservatives will finally begin to tackle this high-priority agenda item with vigor, as it has been left festering through many administrations (both liberal and conservative) for too long.