Your Place in the Database

Regarding the American surveillance state, it seems that the truth comes out a little at a time. We learned about the FBI's Carnivore in the 1990s, which the copied internet data of people whom the agency deemed "reasonably suspicious."  In September 2001, we saw the worst attacks on America since Pearl Harbor.  September 11 left a unified country in its wake, but unfortunately, it was also a country more acquiescent than ever to big government.  The PATRIOT Act was quickly shuttled through the lawmaking process, and life went on.  We found out about NSA domestic wiretapping from a brave AT&T whistleblower in 2006.  The program was given the formality of legality (though not constitutionality) in 2007.  Would it have been had no one blown the whistle?

The surveillance state became even more unsettling with the Change of 2009, no less after political campaigning by the victor against domestic spying.  We found out in 2009 that returning veterans were being targeted as possible extremists by the "Vigilant Eagle" program, a name positively Orwellian in its irony.  The floodgates opened in 2013 once Obama's re-election was secured.  We found out that our government scans all domestic cell phone metadata (phone numbers, recipients, times), all letter and package labels are scanned and saved, and the NSA has agreements with every major internet provider to provide backdoor access to customers' information (see PRISM).  Even our credit card activity is analyzed.  Of course, those are just high points.  The entire last decade we have heard warnings from whistleblowers such as William Binney, as well as periodic admissions from U.S. officials of intelligence oversteps, which they falsely claim are immediately corrected.

One must wonder how the people of this nation would have reacted had all of this come out at once.  Perhaps it is wishful thinking to hope that we would have shown a tenth the gumption of the Egyptians, who in July 2013 unceremoniously flung their Islamist government to the side.  They took to the streets in outrage against tyrants at just the time we learned of the sickening scope of our national government's spying.  We meekly sat by.  As each little bit of this diabolical system is leaked, it is palatable enough to warrant only a minor outrage, and then life goes on, albeit with a new normal.  Tiny violations of our 4th-Amendment right against unreasonable search and seizure, and our 5th-Amendment right against self-incrimination, keep piling up, until it seems that those rights have bled to death from a thousand cuts.  If Americans are the proverbial frog in the pot of water, the temperature has been ratcheted to a near-boil.

For me, the most stomach-churning signpost on our nation's road to tyranny has been the completion of the Utah Data Center.  The center holds data on the scale of yottabytes.  One yottabyte could account for 30 million gigabytes per U.S. man, woman, and child.  It's a staggering capacity.  Now, for Americans, the camera is always rolling, creating a record of our every digital move.  It reminds one of The Truman Show, a movie in which Jim Carrey's entire life was filmed and broadcast as entertainment without him knowing it.

Because of the power of relational databases, and the laws governing internet service provider record-keeping, anything stored in the data centers (there are many across the nation, the Utah Center being the largest and most recent) can be tied to us directly.  When tied to other sources of government data, it's a more complete picture of our life than most of us could even provide about ourselves.  The websites we browse, the comments we make, the e-mails we send, the phone calls to friends, the internet purchases, the Facebook associations, and most everything else you can think of are easily tied together.

Below is a graphic illustrating the power of the relational database, which works by having different "tables" of data, which are then related to each other by common fields.  Conceptually, the relational database is much like a spreadsheet; in this case, the rows denote the type of data, and the columns indicate a unique entry (person).  This is only a trivial example; most of us probably generate dozens of database entries per day. 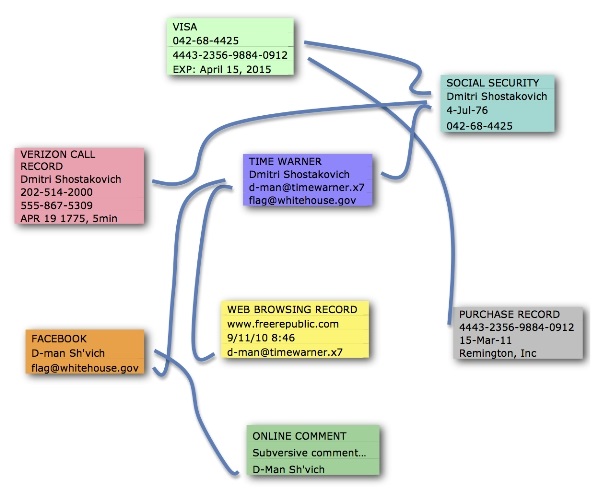 Our Future: An Open-Air Prison

I hope that by now you feel a knot in your stomach. As I write the article, a feeling of claustrophobia is setting in.  At times I must take a break and enjoy the fresh air and blue skies which replaced the thunderstorms of this morning.  None of this is wild conspiracy talk; every program and capability touched on in this article is documented, and much of it is confirmed by official sources.  As I said in the beginning, the truth is coming out a little at a time.

In the early part of 2011, a small scandal erupted regarding Apple Computers' storage of users' location data.  As they walked around with their iDevices, customers' location data was recorded and sent to Apple.  Two years later, we found out courtesy of Edward Snowden that Apple participates in the PRISM program.  Did anyone connect these dots?  We have known since the advent of cell phones that they are roughly trackable based on tower signal strength.  Now we know that all of our metadata is subject to government analysis.  Our government knows everything about us, down to a little breadcrumb trail of our daily travels.  It is even worse for military veterans, and especially those who attended SERE-type courses or obtained security clearances.  Pictures, DNA, and voice records are on file, as well as an extensive list of contacts and life history.

I know what some of you are thinking.  "I'm a nobody.  They won't waste time with me."  Our national security apparatus does not have to waste time with you.  Computer algorithms, which are more accurate and faster than humans, will analyze everything about you to determine where you fall on the threat matrix, perhaps even knowing your intentions before you formulate them.

The algorithms are only going to get more sophisticated, and the data collection more thorough.  We just found out that the police across the country are using federal grant money to emplace license plate scanners on their vehicles, passively collecting even more location data.  The lessons learned by our government from the drone war in Muslim lands are set to be applied here; the FAA estimates that 30,000 drones will be in use by 2020.  A school in San Antonio, TX just ended its hotly contested use of RFID chips to track students, but what is far more important is that a federal court upheld their use in January.  This small step back for tracking was preceded by a dozen steps forward, and there will be more to come.

I have no doubt that 365 days hence, this article will be obsolete.  Given the rush of information we have learned just this year, there is no telling what other unsettling capabilities will be revealed soon.  It is my sincere hope that Americans will rise up and unleash their righteous political fury on the surveillance state, crushing it to bits so that no stone of the edifice stands upon another.  Somehow, I doubt that we will do much, other than wring our hands.  If you do have an idea for how to empower the Wacko-Birds and stop this speeding snowball of tyranny, please try to implement it before the drones arrive in earnest, but for God's sake, don't text or e-mail the idea to get it out.

Brae Jager is a kulak who blogs at braejager.blogspot.com, and can be reached at brae.jager@gmail.com