Warning: mysqli_free_result() expects parameter 1 to be mysqli_result, bool given in /var/www/html/americanthinker/admin/common/functions/func.general.php on line 126
 Is Marco Rubio the New Charlie Crist? - American Thinker
|

Has Marco Rubio become the new Charlie Crist moderate Republican, angering conservatives to please GOP elites and liberal reporters? Thinking people start to wonder: Does Mexico have some scandalous photographs of Marco Rubio as a young man in its back pocket? In other words, what is motivating Marco Rubio's banzai suicide charge?

Now, a political movement has started to draft flamboyant former Congressman Allen West to run against Marco Rubio for US Senate in Florida in the 2016 Republican primary. Allen West gave some encouragement in a radio interview.

Political leaders are pooh-poohing Allen Wes, asserting he'd have an uphill struggle to defeat Marco Rubio who currently has only a ho-hum 51% approval rating against notable 35% disapproval. Similar politicos predicted that Marco Rubio had no chance of defeating moderate Republican Charlie Crist! If Rubio could beat Charlie Crist, Allen West can beat Rubio. And for the same reason: Voters don't like being lied to.

It was breaking promises among Republican politicians, and also Democrats of course, that sparked the Tea Party revolution. The ongoing civil war within the Republican Party is against those who promise one thing on the campaign trail and then violate those promises when elected to office. Conservatives are tired of the broken promises. 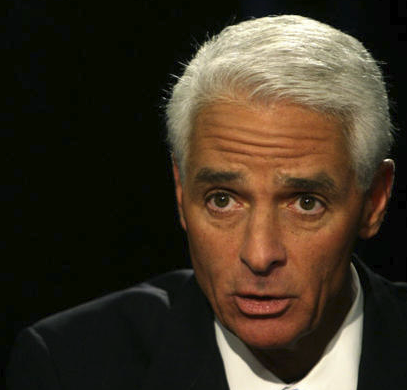 Critics accuse the Tea Party (and other conservatives) of demanding 100% perfectly "pure" candidates who refuse to compromise to get legislation passed. GOP moderates are pushing the false narrative that conservatives demand impossibly pure Republican nominees, thereby ensuring failure in the general election against the Democrat nominee. Hogwash. It's the broken promises that offend conservatives.

Rubio continues to look into the camera and claim that illegal aliens can't get green cards or citizenship without the border being secure first. Yet the question isn't about citizenship or a green card. The "Gang of Eight" immigration reform would give "RPI" status -- the immediate right to work in the United States and the right to live and stay legally. Trespassers will get the right to live and work in the U.S.A. immediately. Green cards and citizenship won't matter much after they've already received "Registered Provisional Immigrant" (RPI) status.

While asking Republicans and others to vote for him in the 2010 election, Marco Rubio said plainly:  "Well, we have a path for citizenship. It's called coming legally into this country. The ones who are already here. You can't do it [ever get citizenship]."

Rubio also promised the voters: "First of all, earned path to citizenship is basically code for amnesty." He went on to explain in that same debate: America cannot be the only country in the world that does not enforce its immigration laws. It is unfair to the people that have legally entered this country to create an alternative pathway for individuals who entered illegally and knowingly did so."

Further: "If you grant amnesty, the message that you're sending is that if you come in this country and stay here long enough, we will let you stay."

In an April 16, 2013 letter Senator Marco Rubio promised: "I will not support anything that makes our immigration system worse, that does not truly and legitimately secure our borders, or that leads to further illegal immigration in the future." Rubio was writing to Florida Tea Party and patriot groups protesting outside his district offices in Florida.

Rubio's letter continued: "I will not relent from the ongoing fight to ensure the American people's voices are heard before any votes are cast on this important government reform, but one fact is true: no bill will be rushed through the Senate as a take-it-or-leave-it proposition."

Rubio explained to the voters during the 2010 election, "...I am strongly against amnesty for a number of different reasons," at time 1:30 in an interview with "Shark Tank" reporter Javier Manjarres. Rubio continued at 1:43:

"The most important thing we need to do is enforce our existing laws. We have existing laws that are not being adequately enforced. Nothing will make it harder to enforce your existing laws if you reward people who broke them. In essence if you go to people and you say, look, well you have been here for so long, even though you broke the law, we are going to let you stay. Number one it demoralizes the people that are going through the legal process. It's a very clear signal that why go through the legal process if you can accomplish the same thing through the illegal process. Number two, it demoralizes the people enforcing the law. So I am not, and I will never support. Never have and never will support any effort to grant blanket legalization amnesty to folks who have entered or stayed in this country illegally." [Emphasis added.]

Rubio won election to the U.S. Senate in part by opposing amnesty for illegal aliens and attacking Republican-turned-independent Charlie Crist for supporting amnesty. Rubio said in March 28, 2010, in a campaign debate on Fox News:

"As far as amnesty, that's where the governor [Charlie Crist] and I disagree. He would have voted for the McCain plan. I think that plan is wrong, and the reason why I think its wrong is that if you grant amnesty, as the governor proposes that we do, in any form, whether it's back of the line or so forth, you will destroy any chance we will ever have of having a legal immigration system that works here in America."

The biggest problem seems to be that Marco Rubio really "believes." He thinks that when Democrats put something in the law, it is actually going to happen. Conservative objections to Rubio's immigration plans mostly involve their view that even the all-new promises in a new law won't be worth the paper those promises are written on.

Conservatives assume that nothing that is in the law will really happen to secure the border or control future immigration. Yet Rubio talks as if he really believes in the Congressional process in a way that pessimistic conservatives no longer do. Rubio apparently thinks that what is in the law will really happen. So the dispute is largely about whether Rubio is a naïve, unrealistic idealist or whether other conservatives have become grumpy, defeatist, and fatalistic, so pessimistic that they are no longer willing to try to fix anything.