Eric Holder and the Fugitives: Marc Rich and Edward Snowden

The recent passing of Marc Rich, the billionaire commodities trader and former fugitive brings back a specter from Attorney General Eric Holder's past, and leaves open a question of just how Mr. Holder might deal with today's most celebrated fugitive: NSA leaker Edward Snowden.

On June 14, Holder stated that "the person (Snowden) who is responsible for the leaks will be held accountable," and the Justice Department filed a criminal complaint against Snowden that same day. But looking back at the way Mr. Holder dealt with Marc Rich while he was Deputy 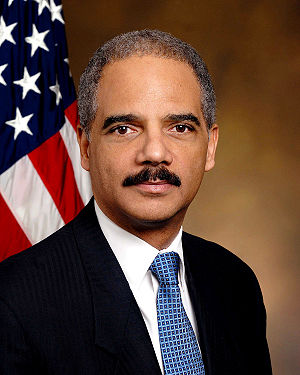 Attorney General during Bill Clinton's second term, "accountable" is definitely not a word that he should be allowed to use.

In the summer of 1983 while under federal investigation, Rich and his business partner Pincus Green fled the U.S. for the friendlier confines of Switzerland. That September, they were the targets of a 51-count federal indictment in Manhattan that included charges of evading $48 million in taxes, racketeering and fraud. At the time, it was the largest tax fraud case in U.S. history. Fourteen more counts were added the following March, and both men faced up to 325 years in prison.

But to many, even more troubling was the fact that the indictment included seven counts of "Trading with Iran" that involved a multi-million dollar oil deal with that government during the Iranian hostage crisis. In November of 1979, Iranian militants had taken 52 Americans hostages and held them for more than 14 months, finally releasing them in January of 1981.

On April 7, 1980, President Carter had issued an Executive Order imposing a trade embargo on Iran. By the end of that month, Rich and Green began negotiating an oil deal with the Iranian government, and between July and September of 1980 had wired more than $146 million dollars to an Iranian government account at a bank located in London.

After becoming a fugitive, Rich continued globe-trotting, while still avoiding setting foot in the U.S. Over the years, his arrest became a personal obsession for a number of government agents. Ken Hill, a U.S. Marshall who had chased Rich for over a decade, told Reuters that "the smoking gun is greed," and that was what Marc Rich had thrived on. Rich had narrowly avoided capture in Finland, Germany, Britain and Jamaica. Besides Iran, he had also openly traded with other rogue regimes while under American sanction, including North Korea, Gaddafi's Libya, apartheid South Africa, Castro's Cuba, Pinochet's Chile and Milosevic's Yugoslavia.

At the same time, Rich became obsessed with obtaining a pardon so he could return to his adopted New York City. Over the years, he went through a number of high-priced lawyers, only to have his plans rejected by a series of U.S. Attorneys. In 1999, Rich hired the ultimate insider: Jack Quinn. He had been Vice President Al Gore's Chief of Staff and then had served as Bill Clinton's legal counsel before going into private practice.

By the time Quinn approached his friend Deputy Attorney General Eric Holder on behalf of his client in October of 1999, Rich was listed on the Interagency International Fugitive List as WANTED by the U.S. Marshal Service, the U.S. Customs Service and the FBI.

Rich was also listed on the Justice Department's website as an international fugitive. The posting further noted that the U.S. "will pay a reward for information that leads to the arrest of Marc David Rich," and even the IRS had offered a half-million dollar reward for his capture. Interpol had also posted Rich on its "Red Alert" list.

Holder was more than eager to help Rich's cause, and was later forced to admit that he and Quinn had discussed Holder becoming Attorney General in a potential Gore administration. Holder acted as a go-between for Quinn and then U.S. Attorney Mary Jo White, but she flatly rejected the idea in February of 2000.

Quinn and the rest of Rich's legal team changed strategy, and moved towards getting Rich a pardon from President Clinton, and Eric Holder would eventually be called on again. Meanwhile, Rich's ex-wife Denise, who had received a generous divorce settlement from her former husband (and had also happened to be close to the Clintons and had contributed to Hillary's New York Senate campaign) had dramatically stepped up her campaign contributions to the Democratic Party and added another large donation to the Clinton Presidential Library (which would bring the final total to $450,000).

According to reports in the Israeli press, Rich himself funneled $120,000 to Israeli Prime Minister Ehud Barak's reelection campaign (and Rich would eventually press Barak for his assistance) and had also donated 200 million dollars to Jewish and Israeli foundations over the coming months.

In November, as Clinton's presidency was winding down, Quinn approached Holder again. The plan they came up with was to go around the normal procedure and avoid contacting the U.S. Pardon Attorney (Roger Adams) until the last minute. Adams would have to do a background check on Rich and Pincus Green (whom Quinn was also now representing) and then contact government attorneys and prosecutors involved with their criminal case.

Holder told Quinn to contact White House counsel Beth Nolan, and have her to call him. On January 19th, 2001, on the eve of Clinton's final day in office, Quinn did just that, and Holder then told a stunned Nolan that he was "neutral, leaning favorable" toward a pardon for Rich and Green. He also added that Ehud Barak was supportive.

Nolan passed on this new info to Clinton, but she expressed her opposition to the pardons (Clinton would later use Holder's recommendation as an excuse for his controversial action). But even at that late hour, there was still a chance to stop the pardons.

Roger Adams would be required to sign the pardons, and when he was informed by White House staff that night, a perfunctory check was done. Adams was stunned to learn that Rich and Green were both fugitives. He tracked down Holder and called him at his home at 1 a.m. that morning.

Adams informed Holder that Clinton was giving serious consideration to pardoning the two fugitives. Holder told Adams that he was aware of that fact, and the conversation abruptly ended.

Holder has given numerous versions of his actions that morning. The narratives included: that he was distracted that night; that he thought that the pardons would never be issued; and that he assumed that Clinton had already made up his mind.

On January 22nd, after Clinton had left office, Holder was now acting attorney general, and the Rich pardon was beginning to erupt in the press. Holder personally advised Quinn to get the "merits of the case out publicly" including Ehud Barak's support. Holder also advised Quinn to have travel restrictions and arrest warrants lifted for Rich and Green, to go to the Manhattan Federal Courthouse and have the indictment dismissed, and finally, to contact Interpol concerning Clinton's decision.

During testimony before Congress that February, Holder was forced to admit under questioning by Congressman Bob Barr of Georgia that he never contacted the FBI, CIA, NSA, State Department nor the federal prosecutors in New York in advance of the Rich pardon.

Holder would also insist during his testimony that he only had a "passing familiarity" with the Rich case even though he discussed it at least nine times with Jack Quinn between October 1999 and January 2001, and that he was unaware of who Marc Rich was until he was first approached by Quinn.

But, during Holder's confirmation to become President Obama's Attorney General in 2009, it was discovered that during the years that Holder was U.S. Attorney in Washington in the mid-1990's, his office had settled a multi-million dollar fraud suit against Rich, but Holder claimed that his staff had kept him in the dark.

So, considering Mr. Holder's record, which includes his efforts to successfully obtain clemency for members of the deadly FALN terrorist group during his tenure under Clinton, as well as the deadly Fast and Furious gunwalking program during his tenure as Obama's Attorney General (which has led to Holder being held in both civil and criminal contempt by Congress), and now which currently includes his recent suspect testimony regarding whether he was involved with "potential prosecution" of members of the press, the question arises whether he should be the person to oversee the potential prosecution of Edward Snowden.