Anyone who is entangled by the Law knows it is almost always dehumanizing.   The law distorts the meaning of what it is to be human by chopping up overall concept of justice into finely sliced particulars.  The result often is that the overall moral concepts on which the law is based, such as the idea of justice, quickly disappear into labyrinths of legal technicalities and gamesmanship.

In other words, often the law as it is presently practiced is a butcher.  The human being is most often the casualty.

Seldom has legal butchery been more evident than in the case of Kermit Gosnell, who literally is a butcher.  While overwhelming testimony indicates the good doctor killed babies born alive through botched abortion, the defense has seen that the trial has quickly devolved into legal minutiae such as claiming the murdered babies were already dead when Gosnell "snipped" their spinal cords, basically beheading the helpless youngsters.

As Timothy Carney of the Washington Post has observed, the basic premise of the defense is that none of the babies was alive when Gosnell or his "assistants" cut their spinal cords: "Every one of those babies died in utero."

In other words, the defense is arguing Gosnell was only doing what was legally allowed.  He was only killing babies in utero and not born alive infants, so he is not guilty of murder.  Everything done at the clinic was legally OK.

"One of Gosnell's alleged victims was named Baby Boy A by the grand jury. He was so big that Gosnell allegedly joked 'he could have walked me to the bus station.'"

Jocularity about the macabre killings is a sign Gosnell's conscience was so far gone he no longer had any left.  Historically, we find such jokes only in the context of atrocities such as the death camps in Nazi Germany or the outpost of the Gulag Archipelago. Serial killers are known to have the same deadness, conscience, completely unmoved by their victims.

According to Carney, defense attorney McMahon said of the prosecution, "They have no case" regarding 'Baby A' because it was killed in utero,'" McMahon said Gosnell, "injected a chemical called digoxin into the baby to prevent a live birth. That was the goal of Dr. Gosnell with [the mother's] consent: to kill the baby in utero.' "

McMahon argued a witness for the prosecution who testified that one baby was delivered into a toilet at Gosnell's clinic was lying when the worker testified, "I took the fetus out of the toilet. I snapped the neck. ..."

The defense argued there was not one line of testimony in that case indicating the baby was alive at any time. [...] "Yes, Gosnell snipped many baby's necks after delivery -- but he had killed the baby in utero hours before with a shot of digoxin."  The purpose of the digoxin injection "is to kill the baby so that it will not be a live birth."

Carney concludes, "It's quite a case when that's the defense."

As anyone who assesses the arguments of the defense in the case can deduce, the humanity of the babies who were murdered disappears into legal arguments which suppose the humanity of the infant begins only if it is born alive.  Anything done to it inside the womb is legitimate if it is the mother's decision to abort, as it is not fully human and not protected by the law.

For much of our country's history, the Supreme Court's decision in the Dred Scott case has been regarded as the worst legal decision ever made.  Chief Justice Taney wrote:  "(Blacks have) for more than a century...been regarded as beings of an inferior order... and so far unfit that they had no rights which the white man was bound to respect."

It was only when a human face was put to the monstrous evil that was chattel slavery that the American public began to wake up to the societal rot the "peculiar institution" was causing.  Harriet Beecher Stowe's Uncle Tom's Cabin" was one such effort to humanize those caught in the horrors of slavery.

Roe v. Wade was a worse decision than even the Dred Scott case in that it deprived the unborn entirely of the right to life itself.

But until the babies butchered daily by the likes of Kermit Gosnell are given a human face, the abattoirs called "women's health services clinics" will continue to thrive while clever lawyers make mincemeat of justice.

Therefore, it is time to talk about the babies, including the one Gosnell described as being big enough to "walk me to the bus."  It is time to see "Baby B" in all the glorious humanity he was and would have become had he not died when the so-called doctor snipped his neck.

Look at this precious little boy.  Look at the photo with that dreadful fatal gash at the nape of his neck.  It's just 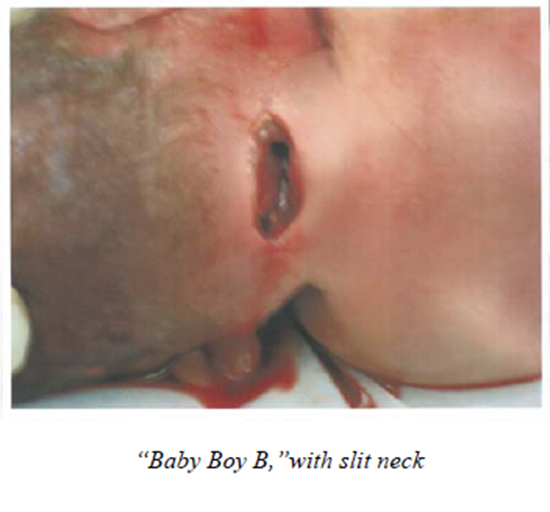 below the fuzzy hair line, where mothers love to nuzzle and kiss.

Later, he would have learned to read.  His mother might have "walked him to the bus."

Maybe he would have joined the Little League or even learned to play the piano--if he weren't teased too much.  Still later: a first kiss, a prom, college, falling in love, getting married.  Then, kids of his own.

But he is dead.

Did the Supreme Court Justices who crafted Roe V. Wade in 1973 ever envision a Kermit Gosnell slitting the necks of newborns?  When they gave in to the contemporary mania that was radical feminism, did they see where dehumanizing the unborn would lead?  Probably not.  Politics and personal prejudice made them purblind.  Even now, who among the Left will see clearly the horrors unleashed by that dread decision -- certainly not our president, who asked God to bless the abortion clinics run by Planned Parenthood.

The justices probably understood no more than Taney, who when he also gave in to contemporary political pressures, did not understand the dread consequences for blacks and all Americans  society that would ineluctably flow from his opinion defining some as less than human and therefore not worthy of the full protection of the law.

Doubtless, the Gosnell case will be appealed.  Eventually, the Supreme Court of our land may once again have to decide if the unborn are human beings who have the right to live.  The decision of Roe v. Wade may be reviewed in the light of the gruesome results of declaring the unborn not human and therefore not protected by the law.  Some fifty-five million babies have been aborted since the 1973 decision.  Some have survived and a few have even lived to tell the tale of the attempts to snuff out their lives. In Gosnell's case, some survived and were put to death. If he gets away with murder, we will be well on our way to permitting  infanticide.

If SCOTUS does not revisit Roe v. Wade, and if it does not define as human those infants, who despite Gosnell's efforts to kill them in the womb, lived to breathe and cry, then God help them, us and our country.

Fay Voshell can be reached at fvoshell@yahoo.com